It’s a great time to be a car enthusiast. Especially of muscle cars. You’ve got everything from a supercharged cat from hell making 707 HP, and now, one of the most highly anticipated additions to the blue oval lineup is the naturally aspirated 5.2 L flat plane crank V8 producing a whopping 526 HP with a redline of 8,250 RPM! Both of the just mentioned examples won’t even run you over or close to 100K. Like I said, it’s a great time to be an enthusiast.

Having tested both the Ecoboost and GT Mustang’s I wanted desperately to get behind the wheel of the latest creation to come out of the Motor City. Having learned quite a bit about the car from various press releases, articles and seeing it a few times in person, nothing could quite compare to getting some actual time pressing down on the go-pedal. 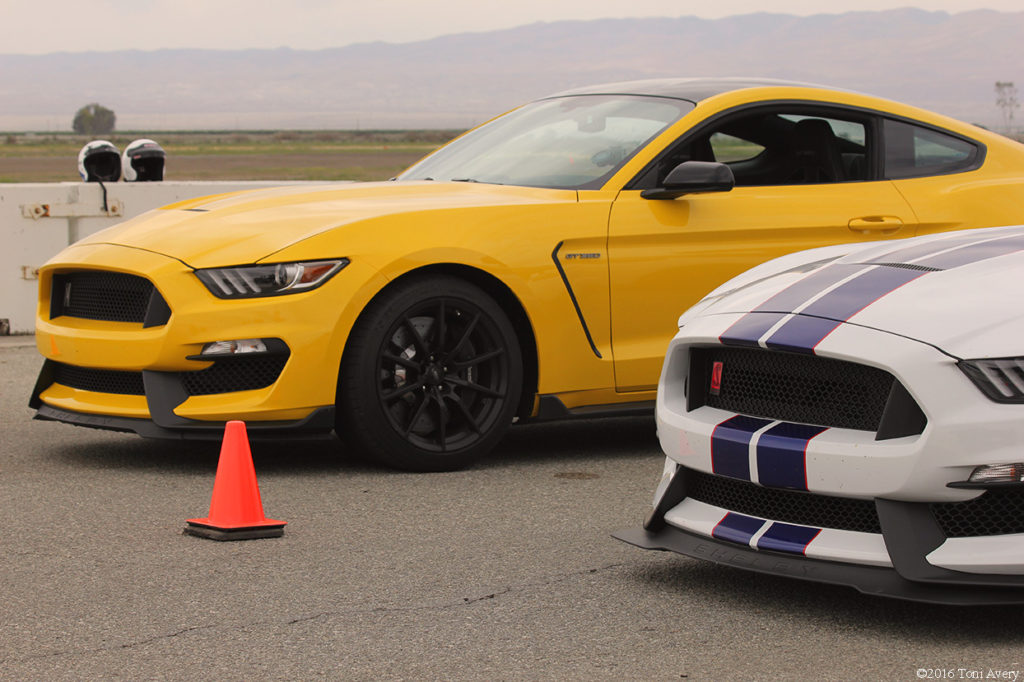 When I opened the e-mail offering me special media access to the car on track, only hours away from my home, my eyes got about as big as the tires on my Lotus. I couldn’t have signed up fast enough and was counting down the days till the event was to take place.

The day finally arrived and after getting over the brutally early hour of 4:45 AM, I made my way to Buttonwillow Racaway Park in California, about two hours from Los Angeles. After registration and a track talk were over, our large groups were split up and we were first to hear some insight into Ford’s performance lineup and just how excited they are to share it’s latest with the media. As much as I enjoyed learning more about Ford Motor Company, I was getting anxious anticipating my seat time in the in the GT350.

Finally, our group was up next. Unable to use any of my gopro camera’s, I was only allowed to capture some footage of my instructor driving with my phone (footage below). I was beyond excited to learn that my instructor at the Ford Racing School in Utah was going to be in one of the cars. I made sure to be in his car so as to get the most out of my short experience. And short it was, because after maybe ten minutes, it was over. 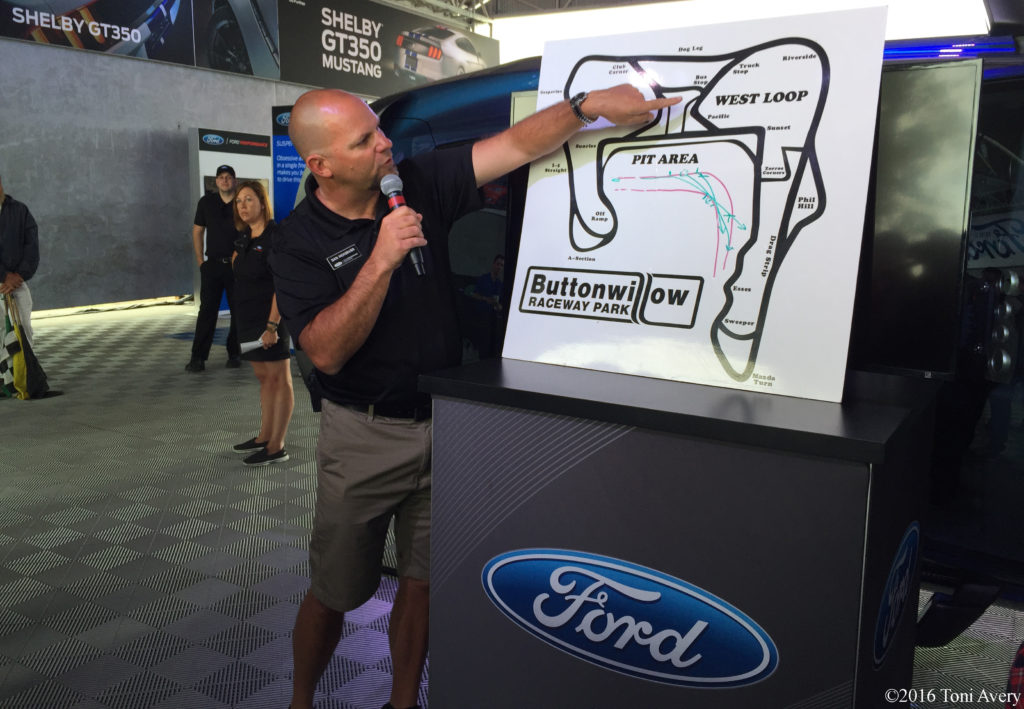 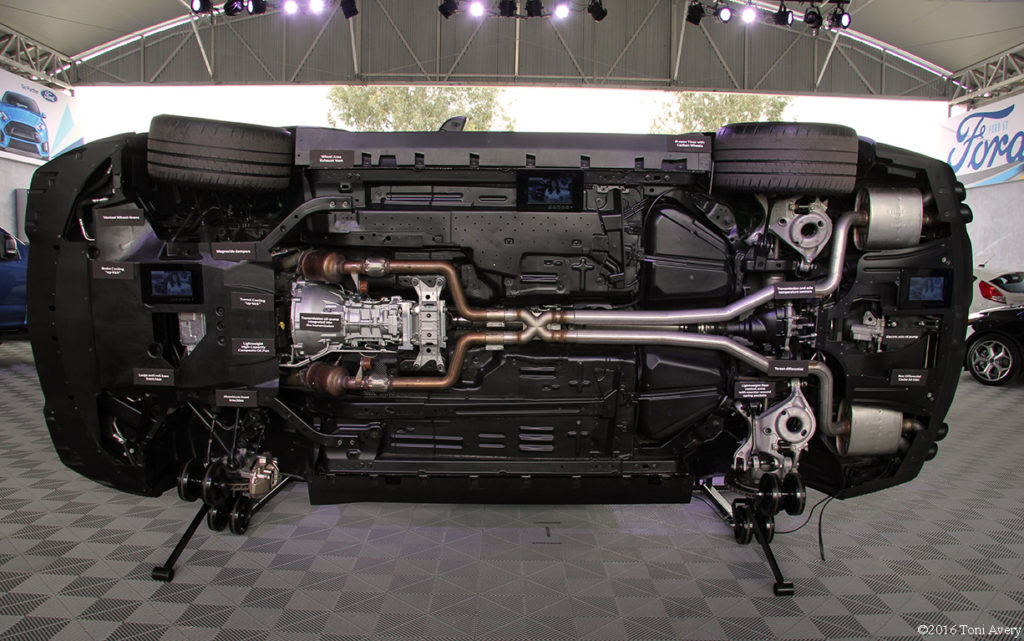 From the first press of the accelerator, the exhaust screamed at me to go faster. If you’ve ever driven a new 5.0 Mustang you know that in Sport + mode driving the car hard it behaves a little like a crazy person. Not in an unpredictable manner, but just like a kind of Jekyll and Hyde from tame and insane in 4.3 seconds (2016 with Performance Package sourced from Car & Driver). The GT350 is like that but about fifty times more crazy and gets there in about 3.8-4.1 seconds (R and non-R respectively). It’s got a massive amount of grip and endless amounts of power.

My instructor had me stay in third gear the entire time I was on track, mostly because it was my first time at Buttonwillow and he wanted me to concentrate more on driving the car than learning where the appropriate gear changes should take place. Even when blasting onto the front straight, at an undisclosed speed, I was in third nearing the 7000 RPM range and not even maxing out third gear.

The brakes provide an impressive bite going into tight corners and the steering is even more precise and deliberate than the current 5.0. I was so bummed when I ran into traffic on my second to last lap. But it also makes you feel good about your speed when you start lapping other drivers. After my short time was done, I rode passenger and was shown what the car was really made of. And after I found my stomach from somewhere inside the car, our group was taken to our next stop.

We learned some key signs in telling the GT350 and the GT350 R apart and what features come standard to each. And for our last stop, we got a more in-depth look at the braking system, suspension and unique carbon-fiber wheels. It was impressive learning just how completely new everything is from your standard 5.0 to the GT350.

A few key differences you immediately notice when inside the GT350 are the Recaro Miko cloth suede seats. They provide even more support than the optional Recaros in the 5.0. And thanks to the suede portion, they also hold you in place better. The steering wheel has some suede pieces that help when gripping the wheel through a tight corner.

While the interior style doesn’t change much from a standard 5.0, with the exception of the items mentioned above, the R gets even simpler. There’s the rear seat delete and the option of air conditioning and other electronic items we take for granted, like Satellite Radio. 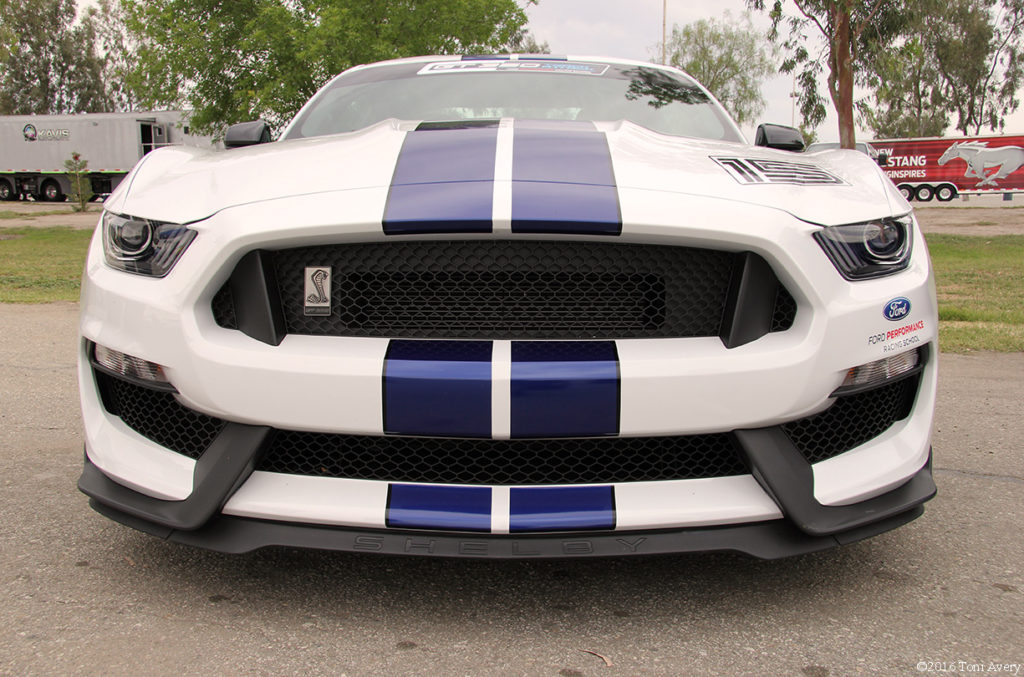 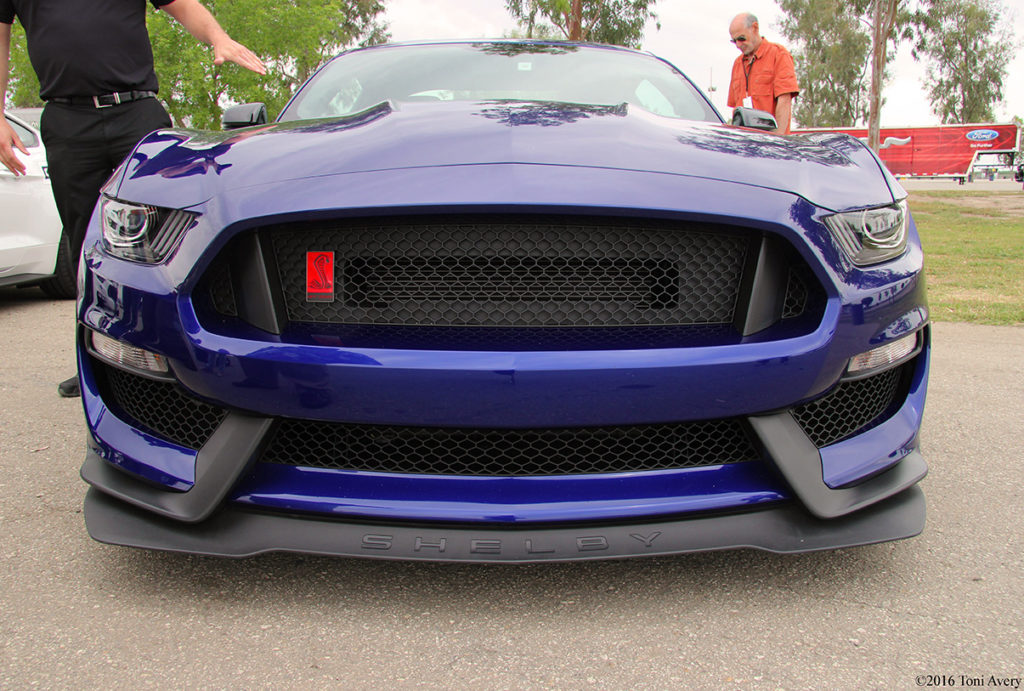 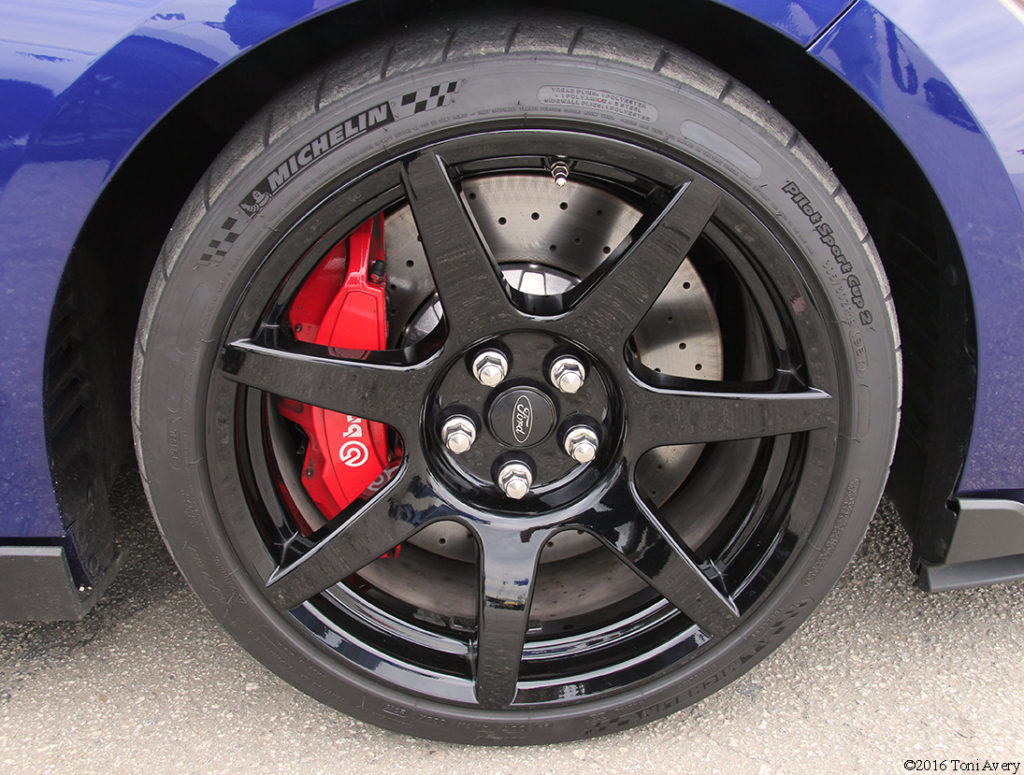 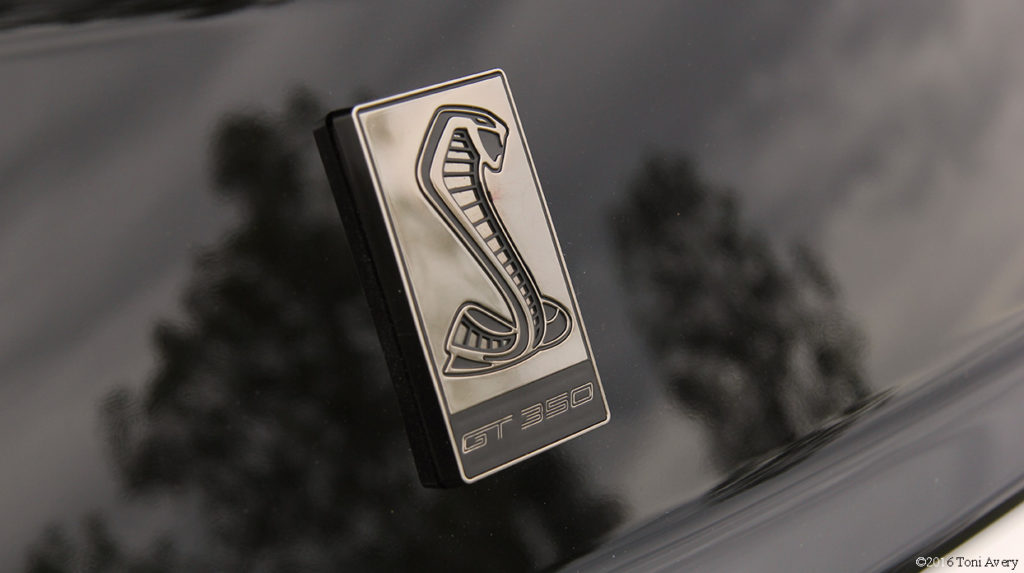 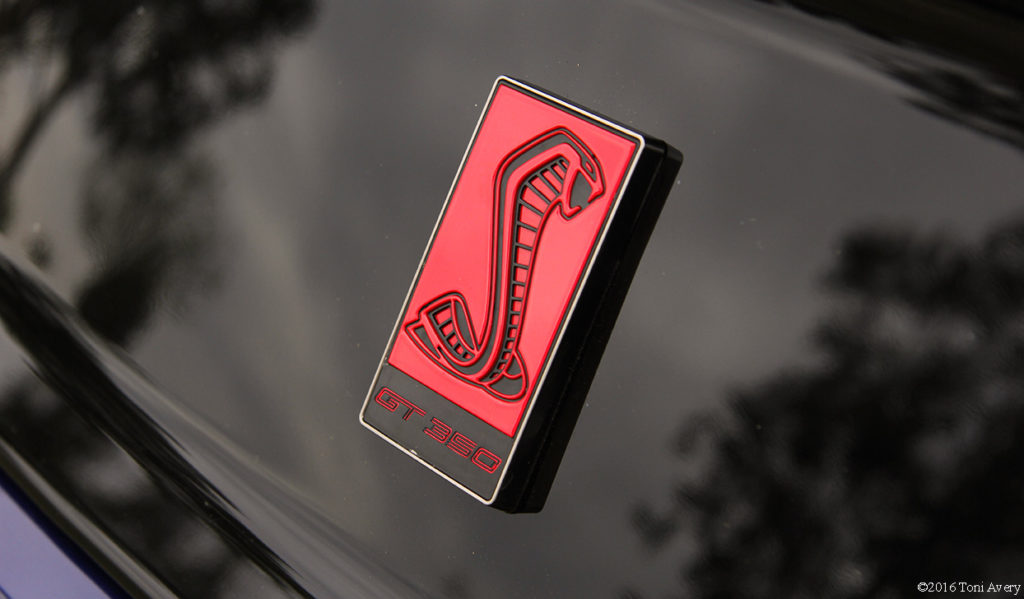 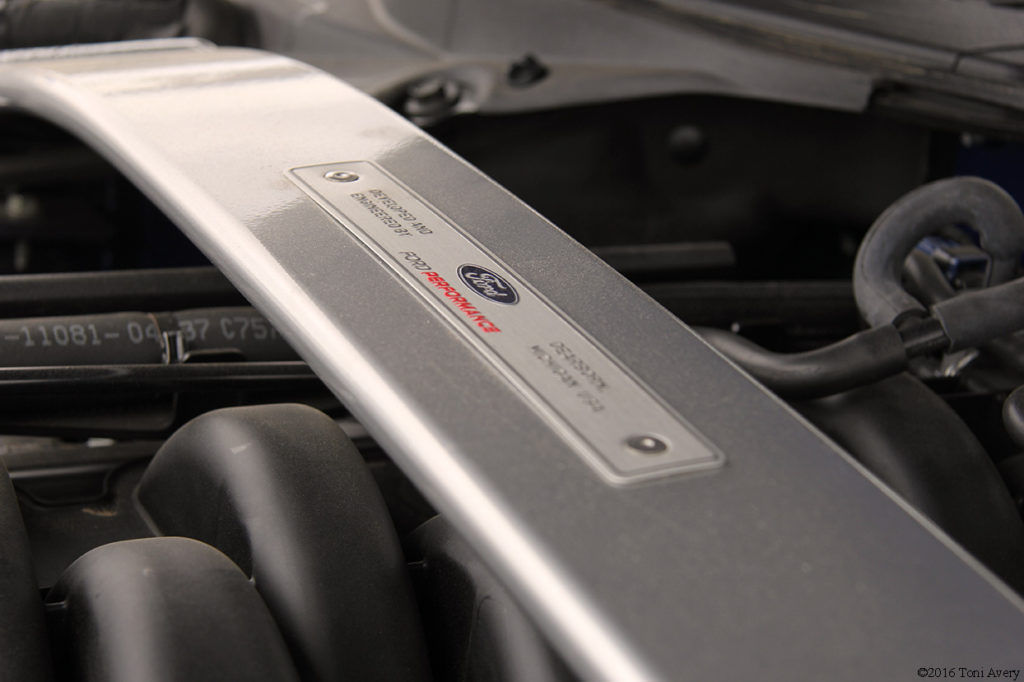 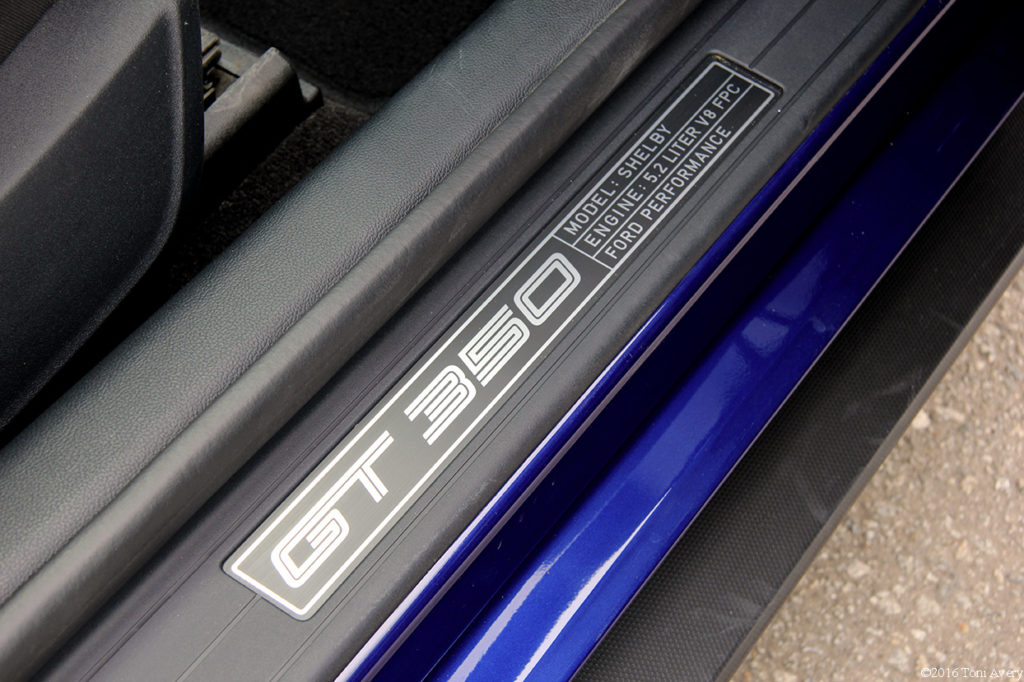 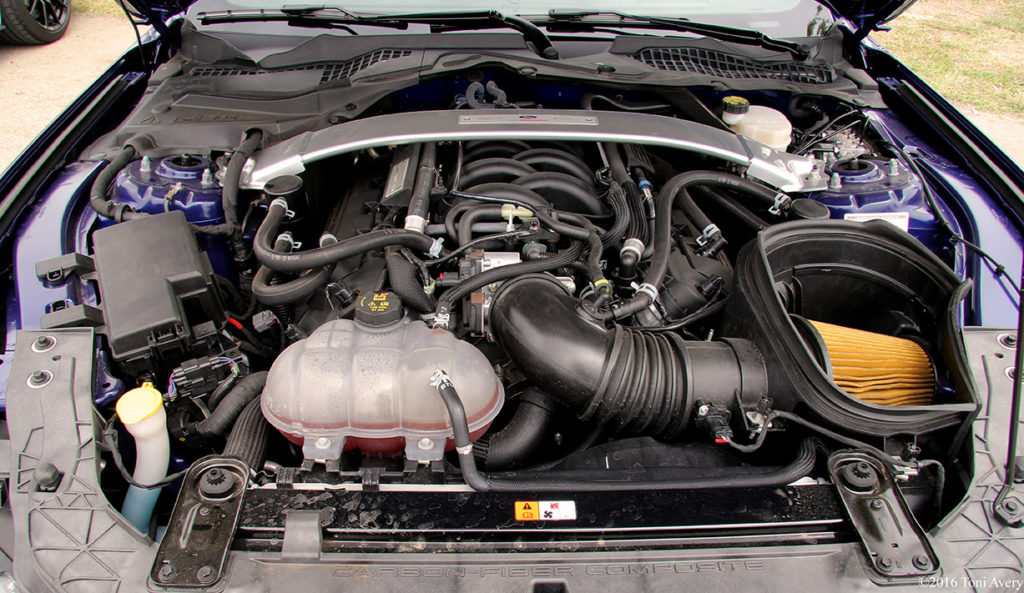 It was an overall great morning getting to know these powerful machines a little better. While I did appreciate the in-depth insight into the inner workings of Ford and the GT350, I think we all would have traded just thirty minutes for more track time in these snakes. 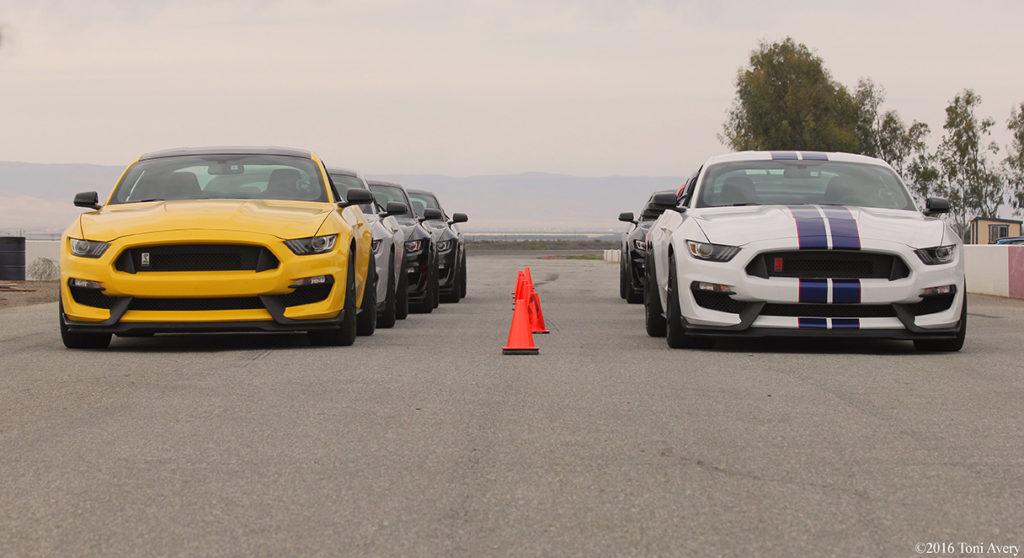 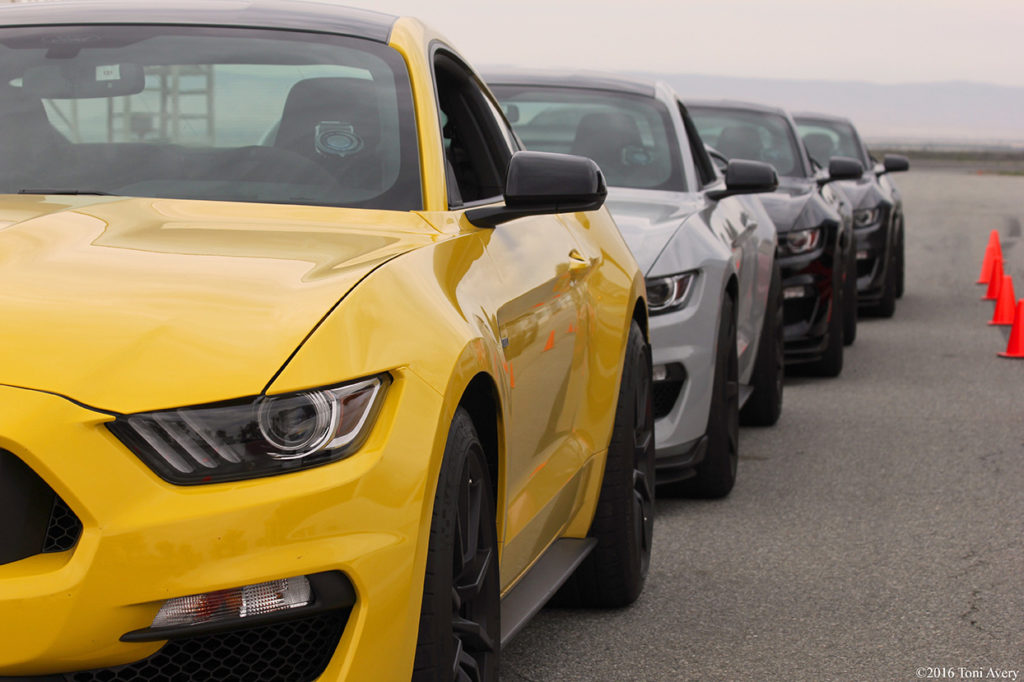 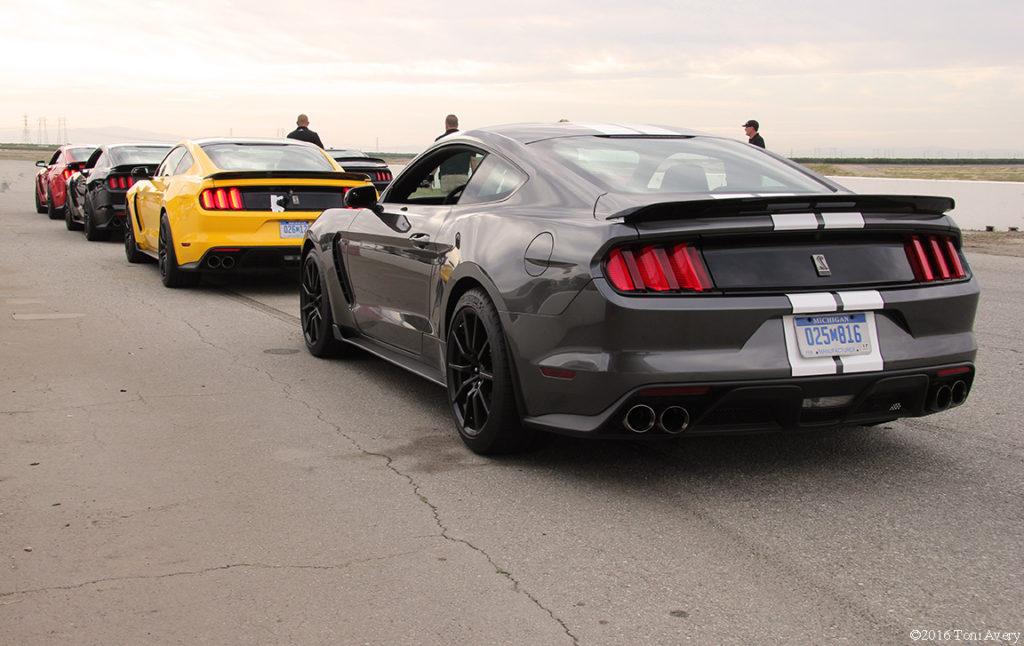 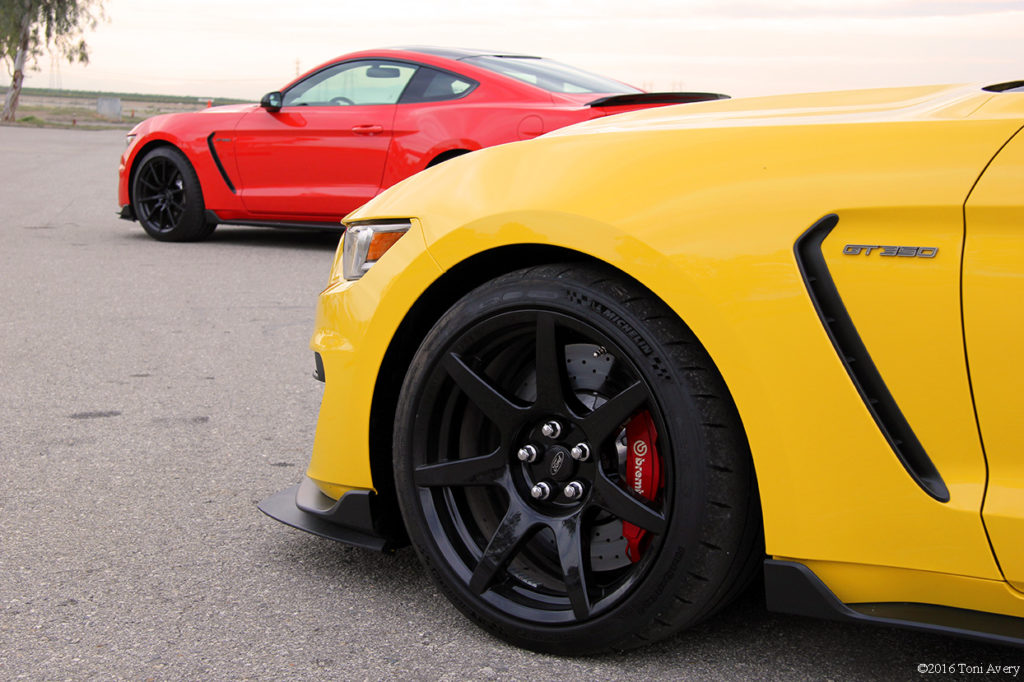 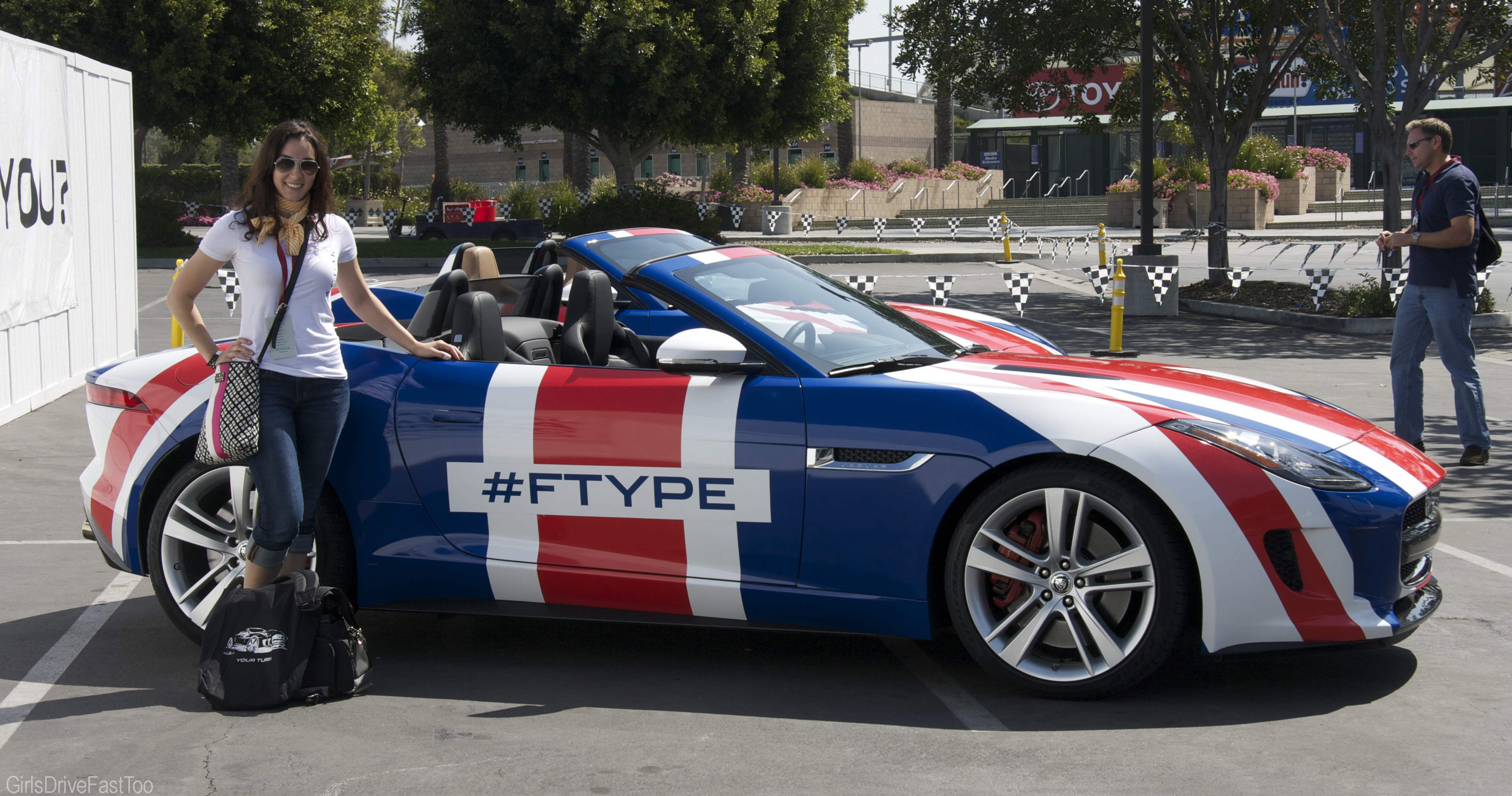 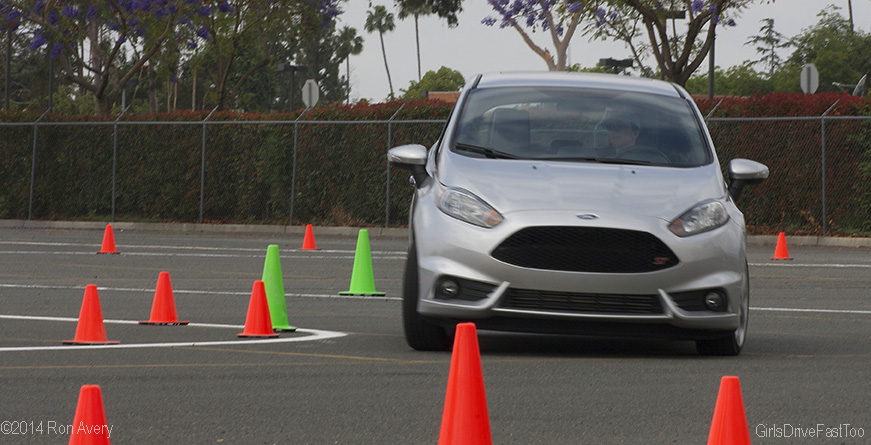