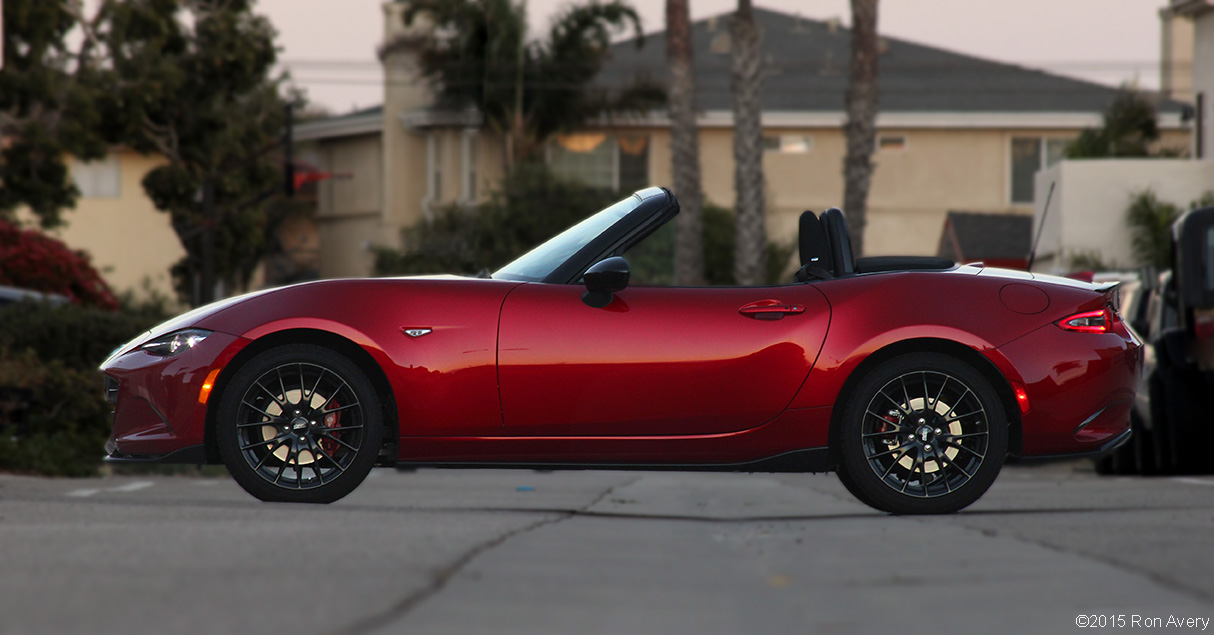 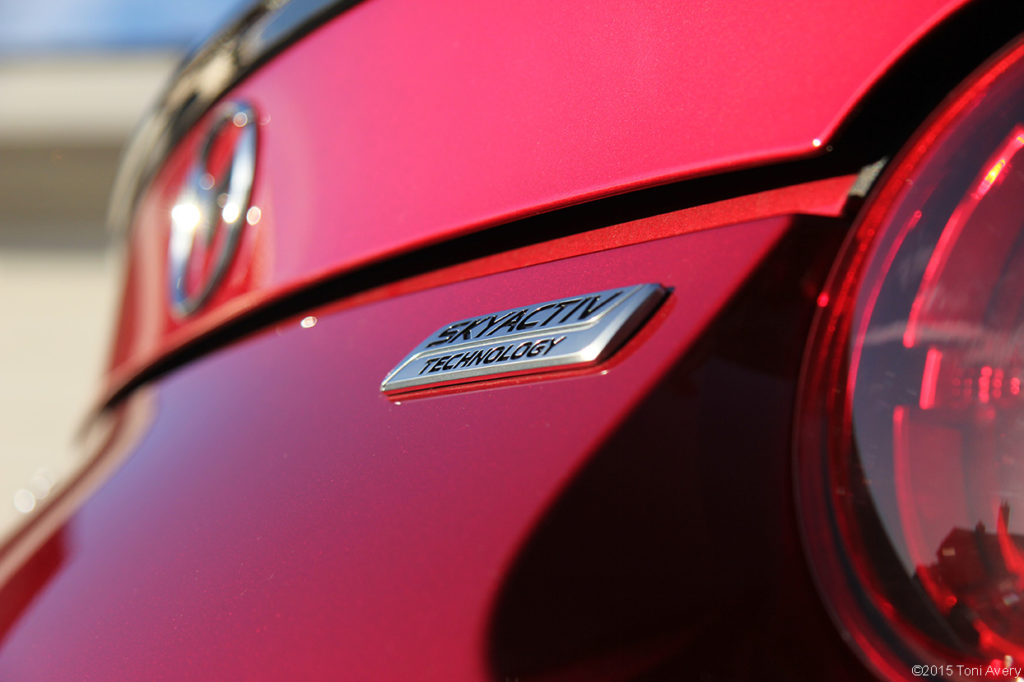 Lightweight, fun driving experience. Simple, yet recognizable design. Minimalist interior with just enough tech to keep any true enthusiast happy. A small displacement motor with plenty of pep for quick canyon romps. These and many more have been the important building blocks for the Mazda Miata. With three different generations successfully launched and still driven on roads today, will the next-gen ND hit or miss the mark? Read on to find out. 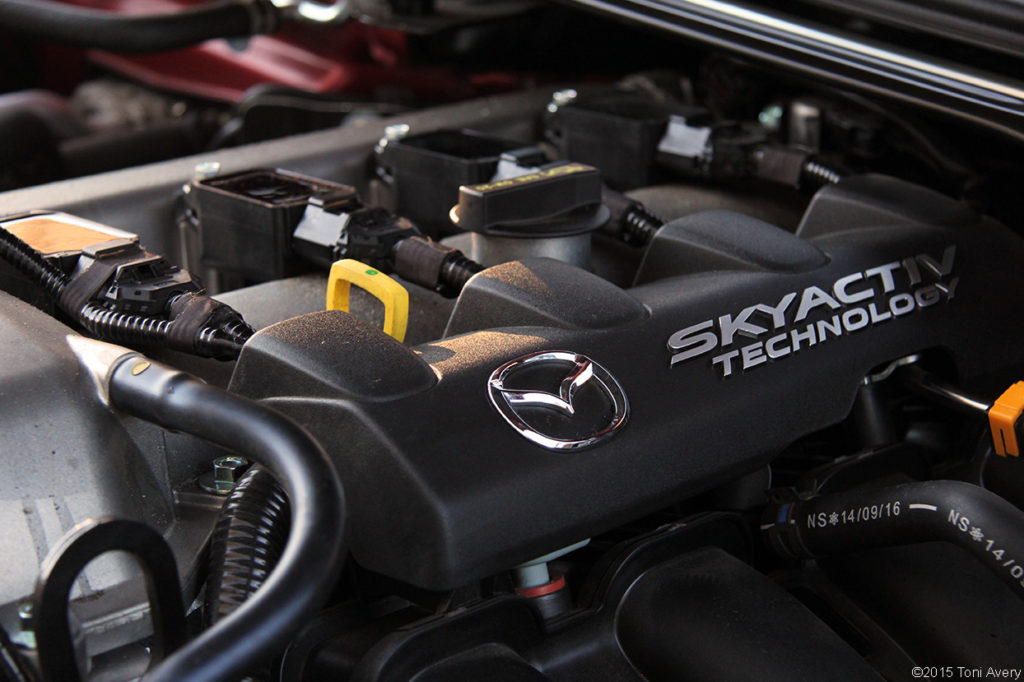 This Miata is equipped with a 2-liter Skyactiv 4-cylinder engine producing 155 HP and 148 lb-ft of torque mated to a 6-speed manual transmission with stopping power provided by Brembo.

Under the hood is an entirely new motor for the Miata. While it produces less horsepower than the last generation, the overall curb-weight decrease more than makes up for it. It’s all around quicker, faster and much more satisfying to drive than the last gen NC. And it produces substantially better gas mileage than the last gen with my average for the week at 31 MPG. Even when driving around town, it feels incredibly nimble. It’s easy to tell that this ND would make an ideal track car. 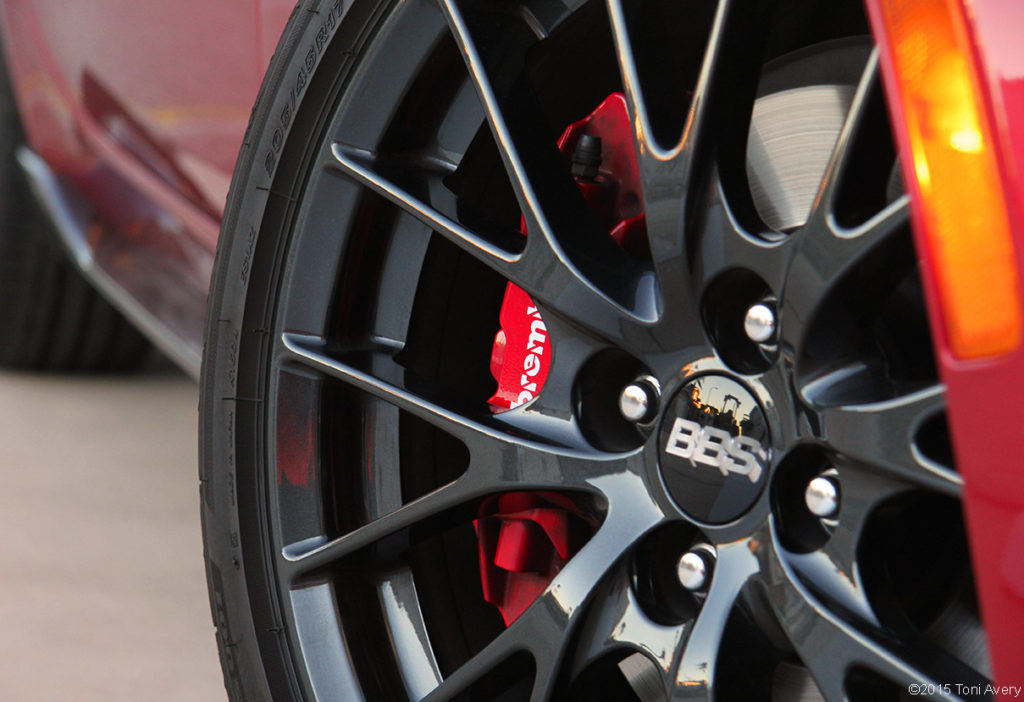 The Brembo/BBS Package (optional) adds not only a great look but also provides better braking performance for this little gem. Thankfully I never had to use the full power of the brakes, but when I needed them, they provided positive brake pressure and allowed for any last-minute stops to be accomplished without protest.

While canyon driving was fun in the ND, I found that just simply driving at any speed was incredibly enjoyable. Hoping into my NC after giving this car back made me want to make the impractical decision of a trade in. 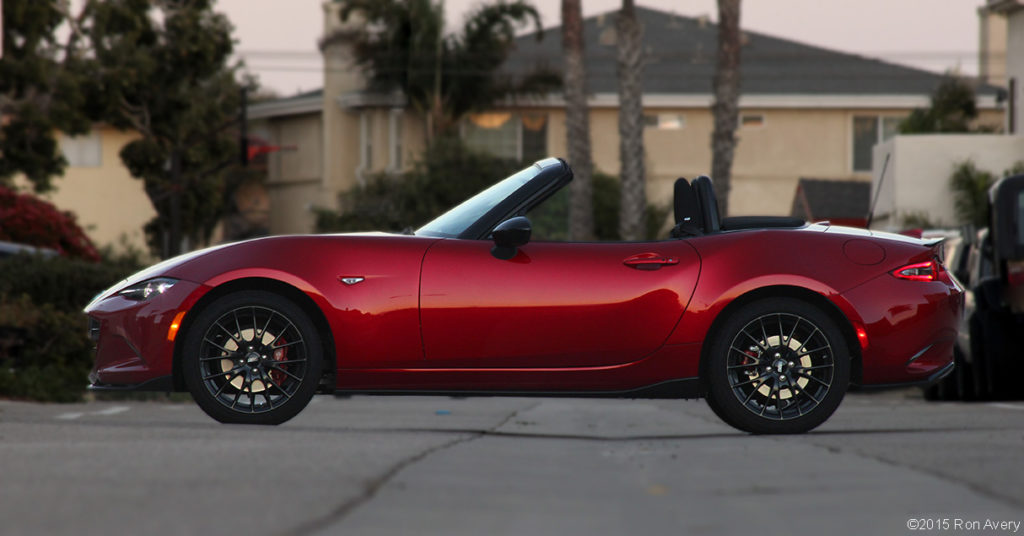 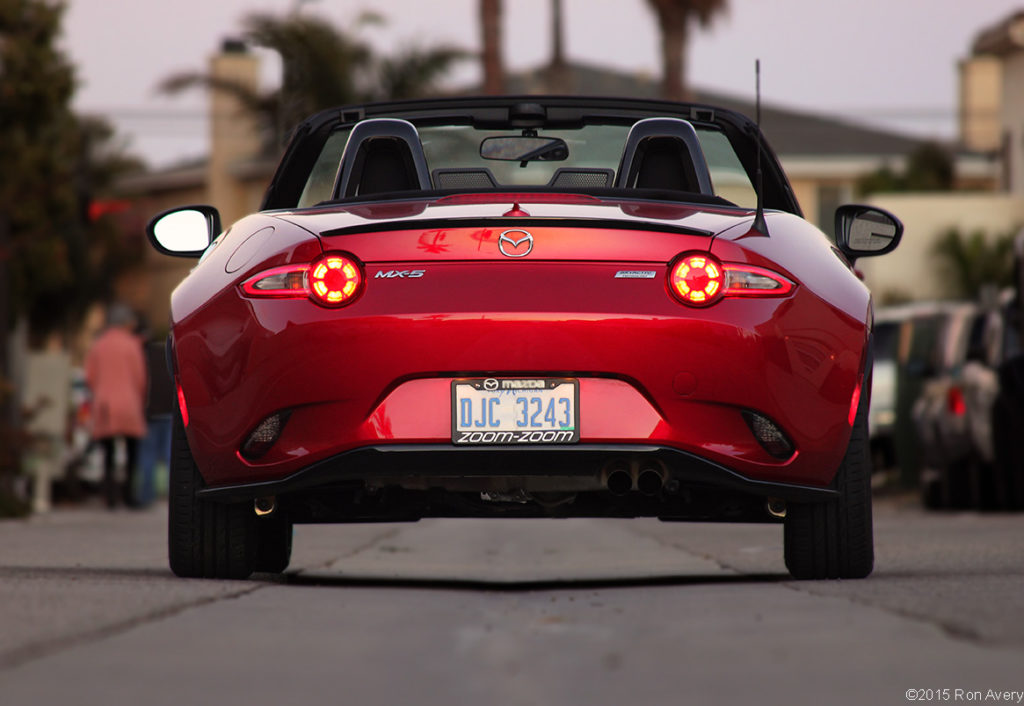 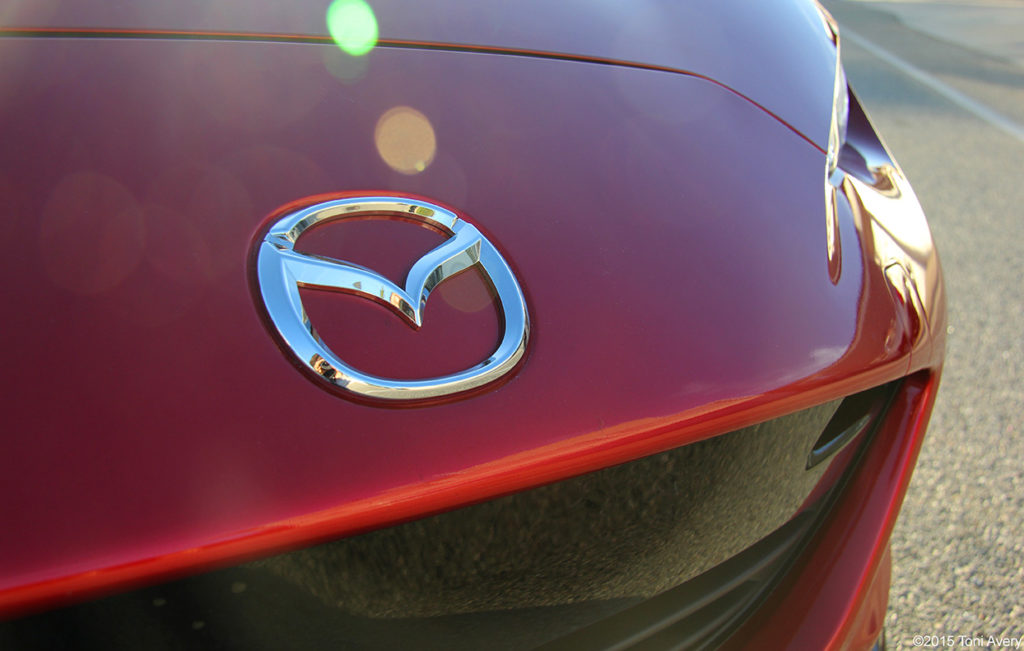 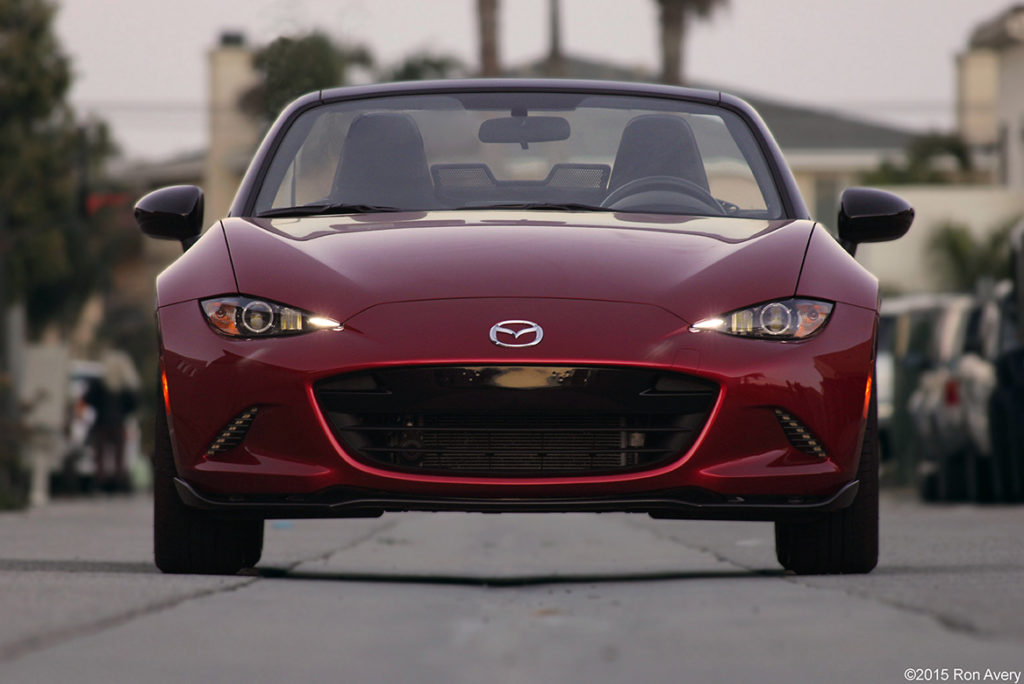 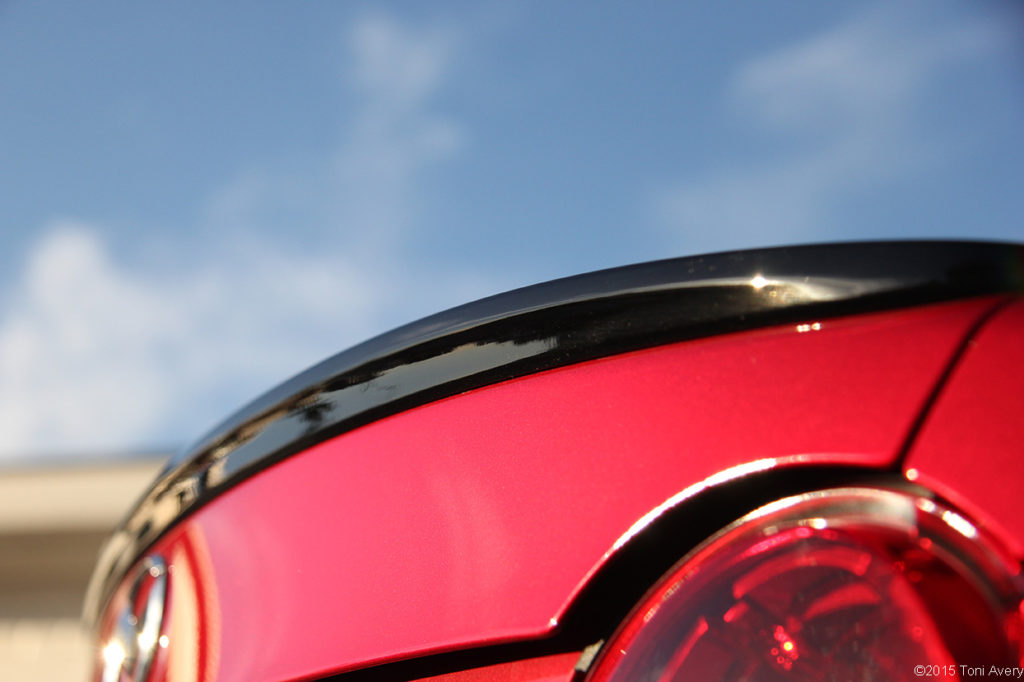 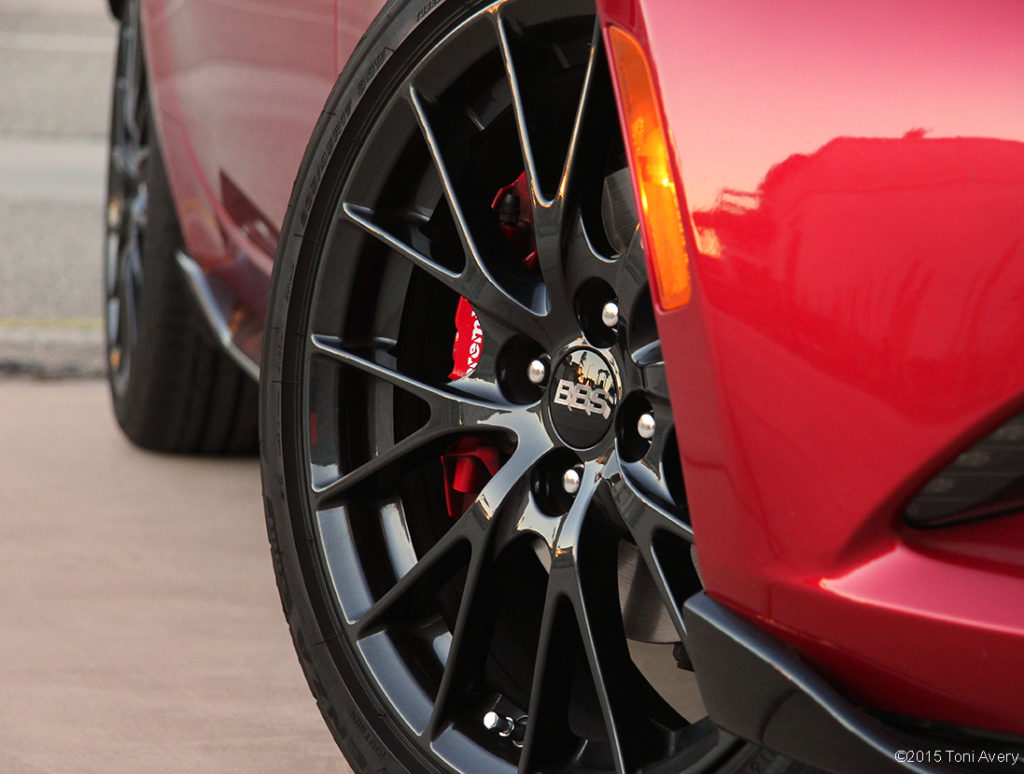 The exterior of this Club is finished in Soul Red (optional) with the Appearance Package for the Club, which includes a special front air dam, rear bumper skirt, side sill extensions, and black rear spoiler.

The black accents, just like on the NC Club, further differentiates this Miata from the other two available trim levels. While the rest of the accents are fairly subtle, the rear spoiler adds a really nice, aggressive touch.

Compared with the last gen NC, the 2016 is a far more modern looking car. It offers both an aggressive edge while also continuing that classic Miata charm. 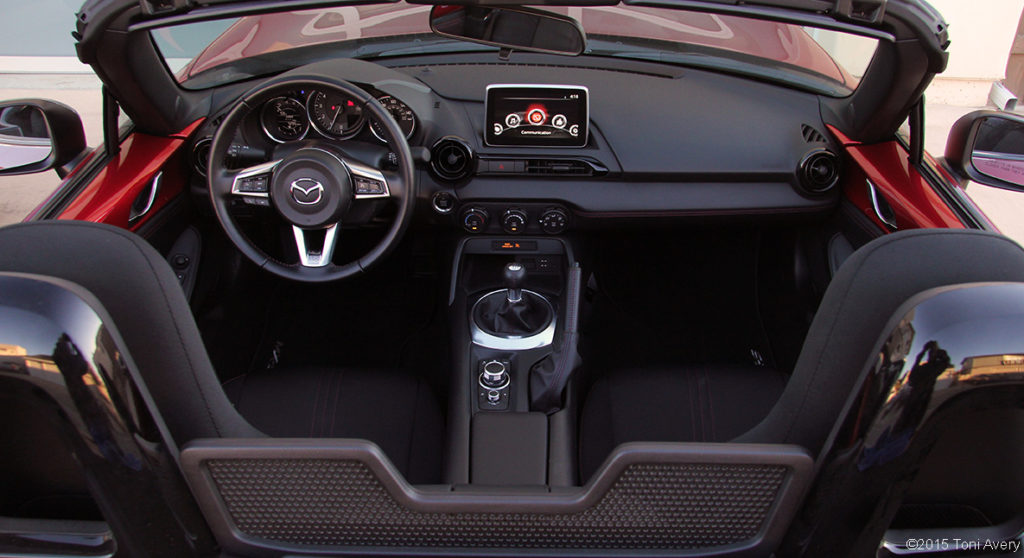 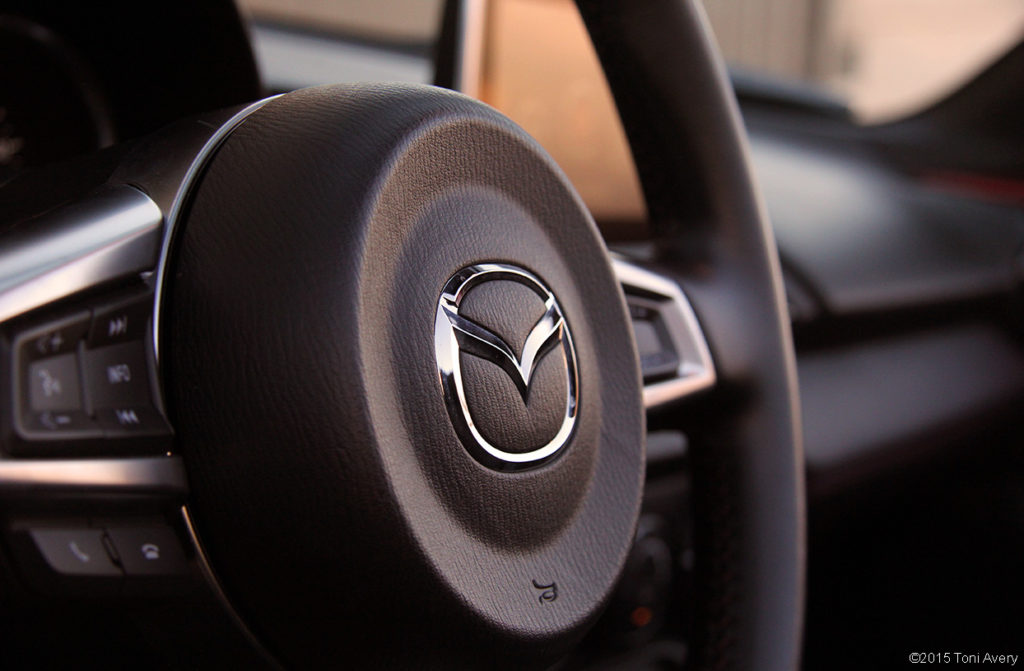 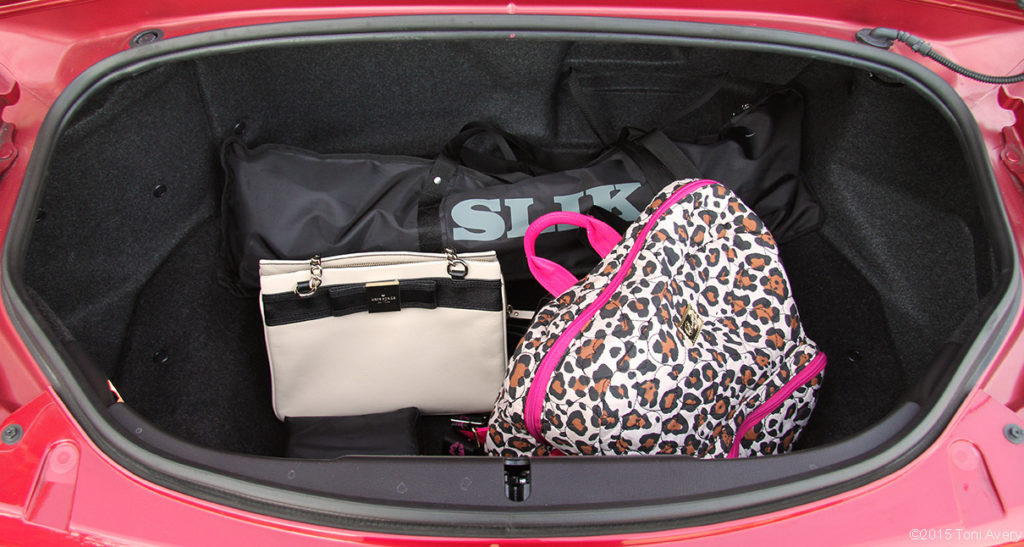 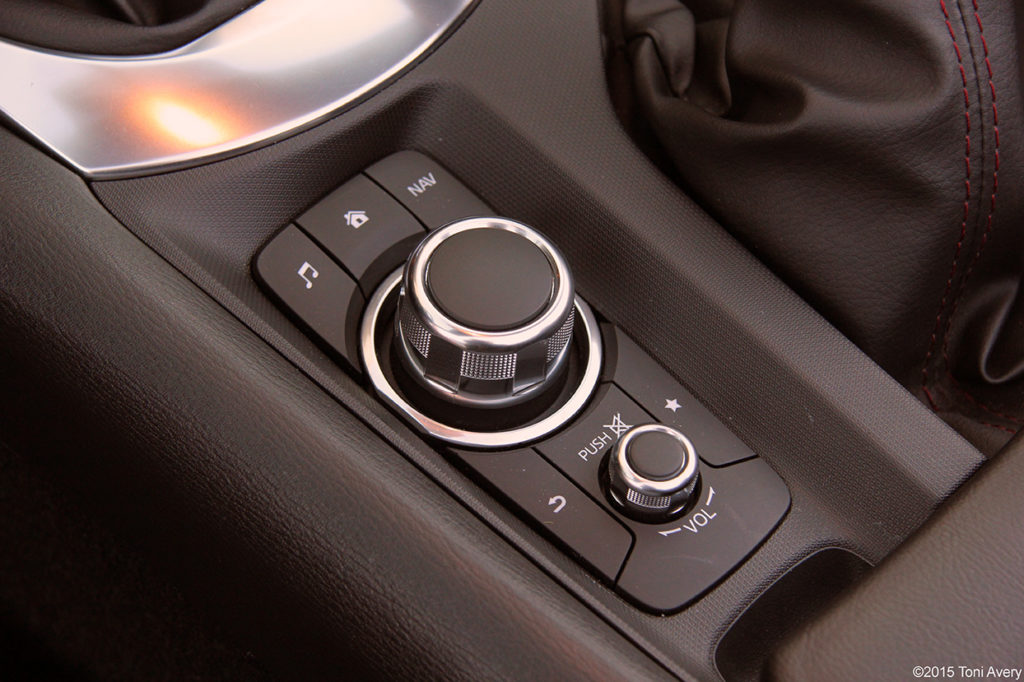 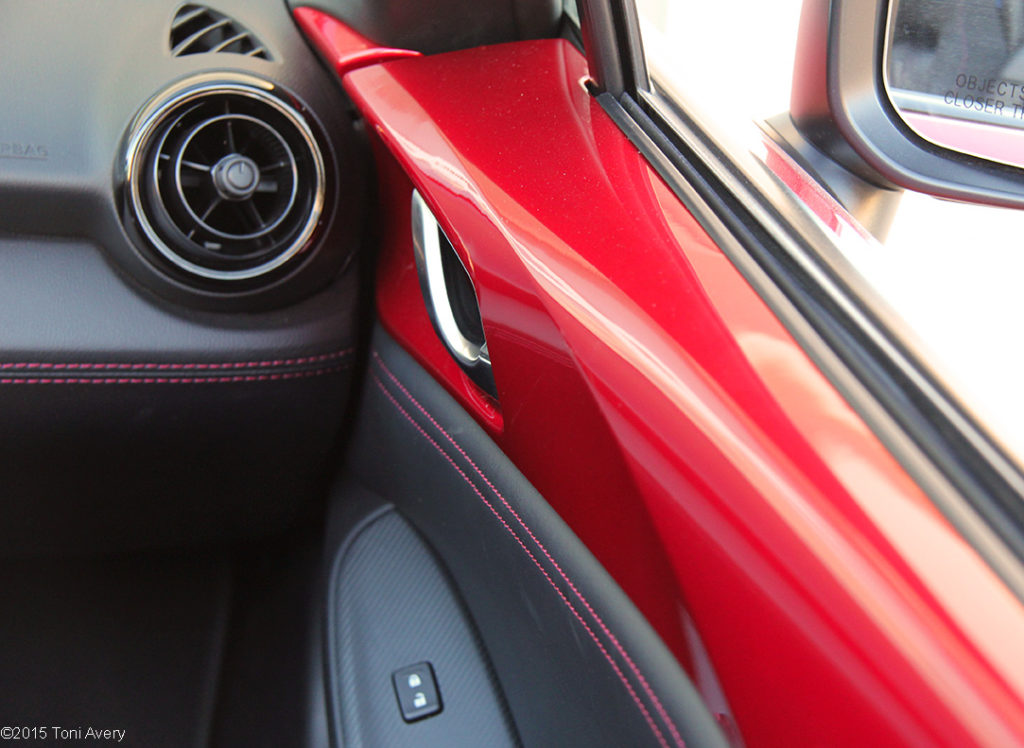 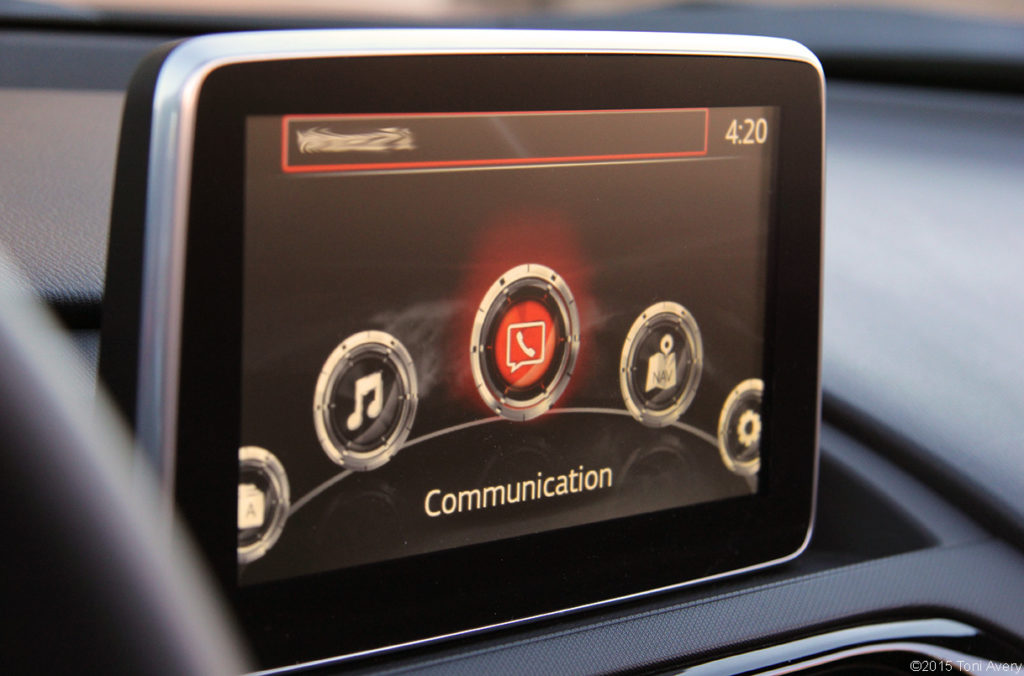 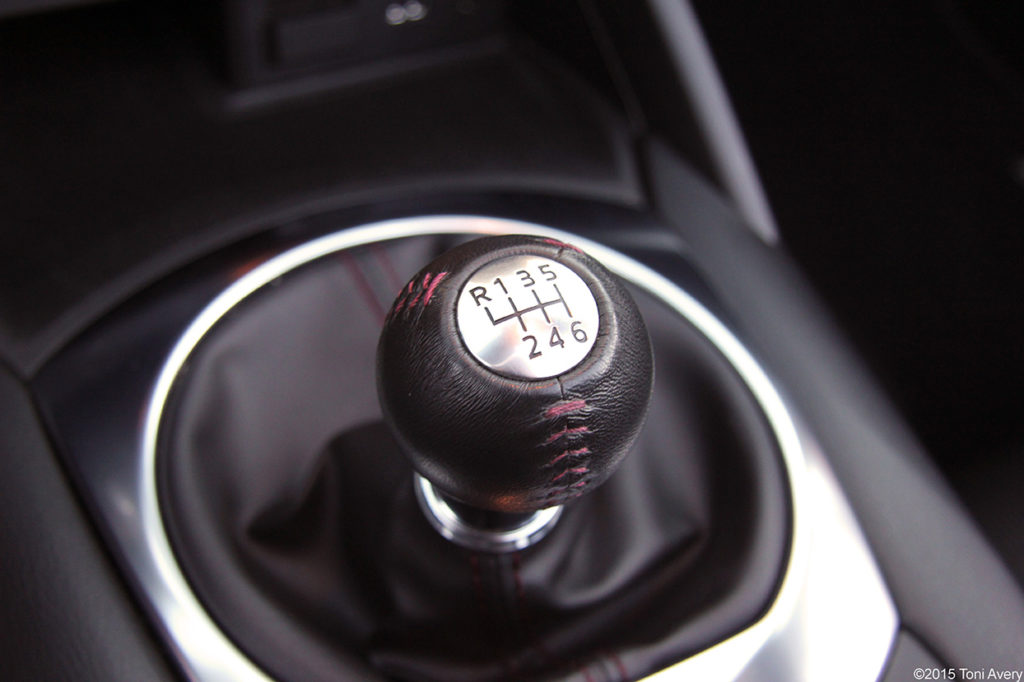 The interior has been completely updated for 2016. As a current Miata owner, the interior quality has been one of the biggest downsides to previous generation cars. Too much plastic, not enough standard equipment and poorly placed cup holders.

Now, with this car you’ve finally got some nice leather touches, more than just a little red stitching, a navigation system, standard Bluetooth (in the previous NC it was not standard) and cup holders that don’t get in the way of shifting! Cup holders may sound like a minor thing, but any Miata owner will tell you that where they were previously placed was a huge inconvenience. 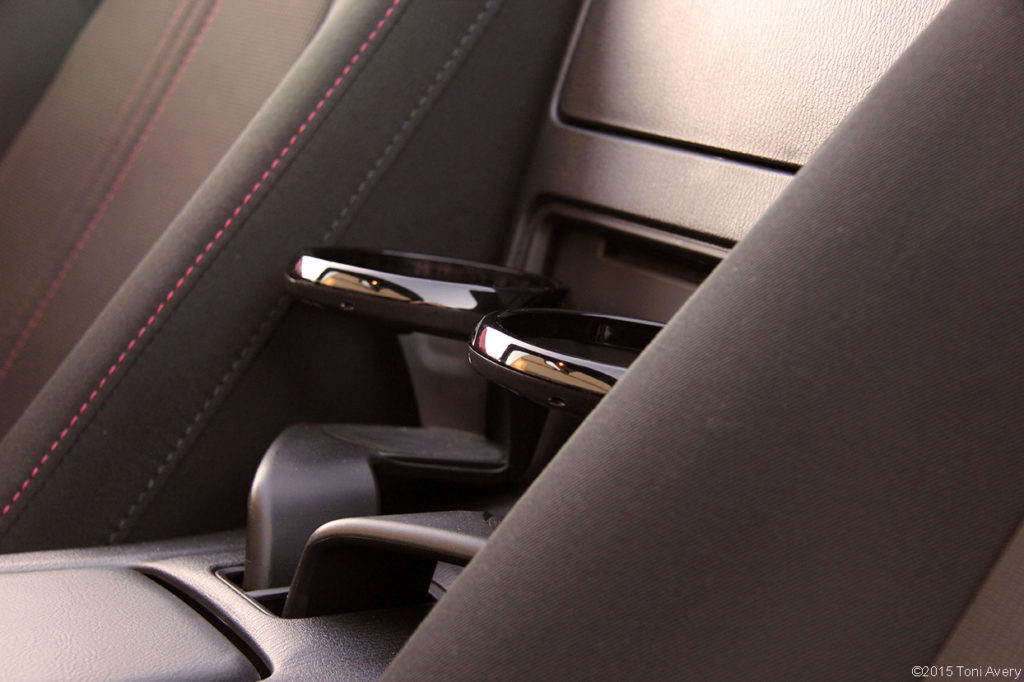 Overall the inside of this new gen ND is better than I could have ever imagined a Miata to be. It’s sophisticated without being too fancy, it’s simple without using ridiculous amounts of hard plastic. My only complaint would be the noise level during high-speed driving with the soft top up. Yes, this top weighs a heck of a lot less and is much less complicated to operate than a hard-top, but I’d wait to purchase one of these if and when a hard top is optional.

It’s been a long time coming for the Miata’s styling and interior quality to drastically change. Through each generation, several things have remained: a simple yet fun design, minimalist interior, and a pure driving experience. While this gen offers so much more in terms of technology and standard equipment, it still offers that pure driving experience you’d expect from a Miata.

GirlsDriveFastToo gives the 2016 Mazda Miata Club an overall rating of (out of 5 total):