Purchasing your first, or second or maybe even third SRT vehicle is an experience in itself. The ingredients of an SRT car include: a big American motor, lots of horsepower and a kick-you-back-in-your-seat kind of ride. Owning one isn’t just awesome, it’s a privilege.

In order to really understand and treat your SRT vehicle right, you’ve got to learn how to properly drive it. Luckily for the new buyer of an SRT, you get to experience and abuse other SRT vehicles on the track for free (included in the purchase of the vehicle). With locations around the country, you’re sure to find the right track to experience the limits of your new car.

This isn’t a grueling two-day hour after hour of non-stop track work kind of school. This is an experience, more to give you a taste for what an SRT can do. It’s perfect for the guy/gal who’s never been on track but loves to drive their fast car. According to the guys at the SRT Track Experience, about 90% of people who come through have never even been on track. With this in mind, the curriculum and pace of the Experience work for the average Joe or new SRT owner. I do think the school could have benefited from a braking exercise to really learn how the car stops and how aggressive you can be with the brakes, especially in a potential collision.

Even with all my years of track experience, I still benefited and learned from the various exercises throughout the day. I came away wishing the Challenger I drove to the event was mine to keep.

Our group was lucky with the first exercise of the day taking place on track. We had our pick of several SRT vehicles including Jeep SRT, Chrysler 300 SRT, Dodge Challenger SRT, and Dodge Charger SRT. Limited to two laps per car we were able to swap models and positions behind the instructor often.

Before the lapping began, our group instructor went over the rules of the track and common practices to be executed while driving these powerful machines. The instructor emphasized the importance of a good, clean line around track. How turning in at the right time, hitting the apex and unwinding the steering towards the exit point all adds up to speed on the straighter portions of the track. 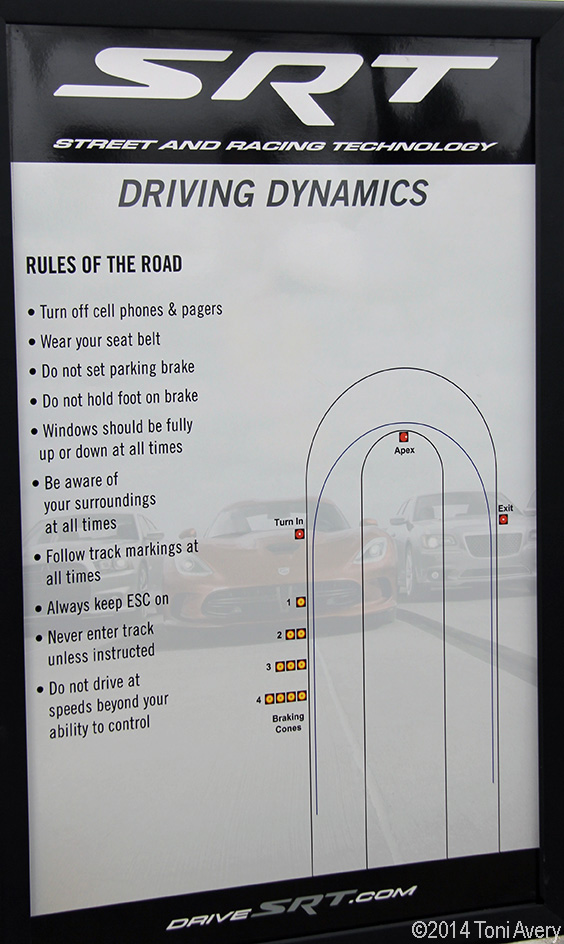 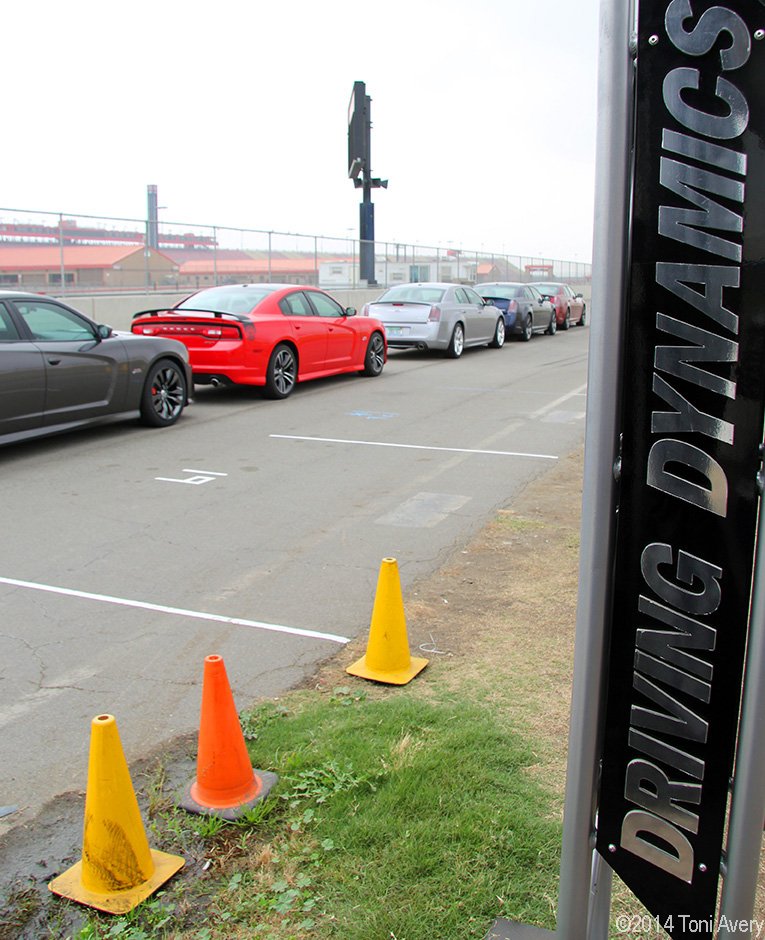 The instructors who lead each of our two person groups held manageable speeds especially for those who had never been on track before. We followed these skilled teachers through each corner, braking when they did, accelerating when they took off and following the exact line they took. As the session went on I saw increased speed out of several turns and later braking going into others.

Each of the SRT vehicles performed well on track. Progressively, each defined themselves as powerful track monsters. The Charger SRT seemed to like corners better than the rest while the Challenger SRT loved to go all-out in a straight line.

The car that impressed me the most out of the bunch was the Jeep SRT. What an incredible car! The Jeep sounded the best, seemed to like being tossed around and sure got to speed quicker than any SUV I’ve driven in some time. Even after all the exercises demonstrating the capabilities of each SRT vehicle, the Jeep stuck with me.

For the most part, when I think Autocross, I picture small nimble cars capable of turning through the tightest corners and avoiding all those points deducting cones. Well, scratch that thought and replace it with a Challenger SRT and Jeep SRT.

As with Exercise One, Exercise Two started with a brief discussion on how to get the most out of the Autocross. Each cone hit, straddled or run over would equal a one second penalty, ouch. Making matters more difficult, the car needed to finish in the parking box at a complete stop with all four wheels inside the lines. The time to beat was 31 seconds with the title of champion up for grabs. 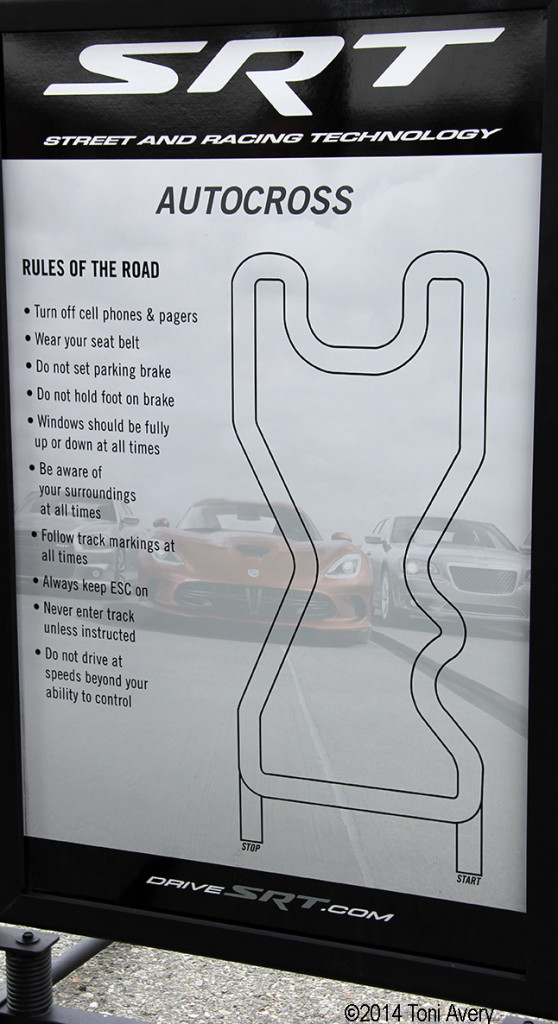 This particular course was pretty narrow with tight slow corners especially effective for those agonizing seconds you know you’re losing trying not to destroy any cones.

In the Challenger, it was tough to maneuver around the tight corners with every bump in the road feeling like a second off your time. At one point I turned the wheel so quickly that the backend snapped on me and I was lucky it didn’t result in time deductions. The Jeep felt a bit tighter, but it was almost impossible to see the cones or where to avoid them. Keeping it in first gear resulted in an awesome loud engine noise. I made my best time in the Challenger.

The last and probably the most challenging course of the day was the Head 2 Head challenge. In this exercise, two participants went head to head, hence the name, in a tight and slow course meeting in the middle to repeat an almost mirror image of the first part of the course ending in another parking box. While the challenge was based on who got to the end first, there were at least two ways to give away your quick time to a more cautious driver.

The first is the more obvious cone hitting choice. The other is not stopping completely at the halfway point of the challenge. No California stops here. And if you stop too far out of the box at the end you can also lose valuable time and points. 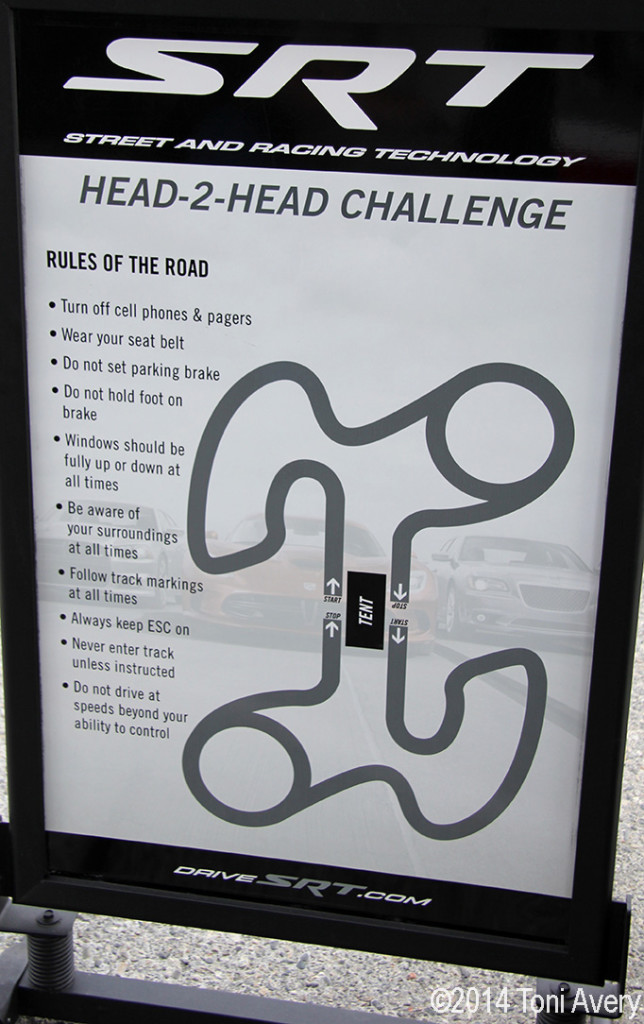 Starting out of the box was no problem. Tires spun and smoke built up in anticipation of making it to the end first. The tricky part was the large, slow, sweeping turn that came right after the start and halfway point.

Each time one person would win the round, they would go head to head with another winner from a different round. And so, each round created competitions between winners and losers ultimately ending in one champion.

A sure way to make you feel bad about everything you just did is to get in the car with a professional and have them tear up some rubber in the name of speed.

I hopped into one of the Chrysler 300 SRT’s passenger seats and let the professional show me how it’s done. From the start he pushed the pedal to the floor and maneuvered the car through each turn so quickly I hardly had time to move myself from the side of the seat I flew over to.

You can’t really see it in the video, but I was smiling pretty big the entire way. I’m not sure about the rest of the participants but I wasn’t scared one bit. It’s such a thrill to get tossed around at speeds we all hope to get to some day.

The day ended with some winners announced and mini cones offered as prizes for those who stood on the podium with the fastest time of the day.

We all came away with some free goodies and a better understanding of the SRT vehicles parked in the lot. While I was probably the only one who hadn’t actually purchased one, I could just see how fast everyone’s minds were spinning trying to wrap their heads around what an incredible machine they have parked in their garage. 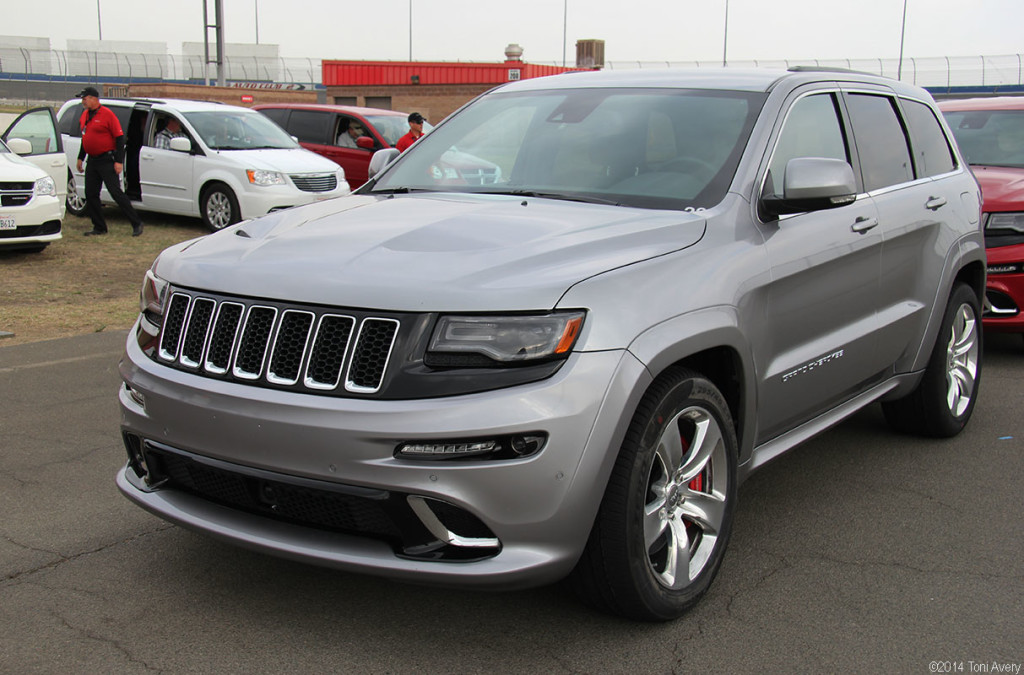 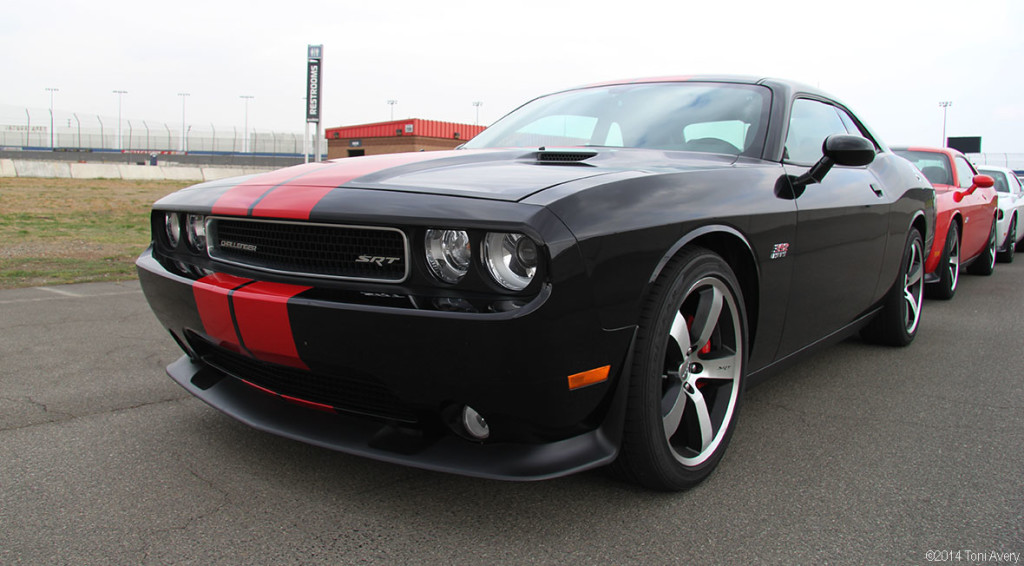 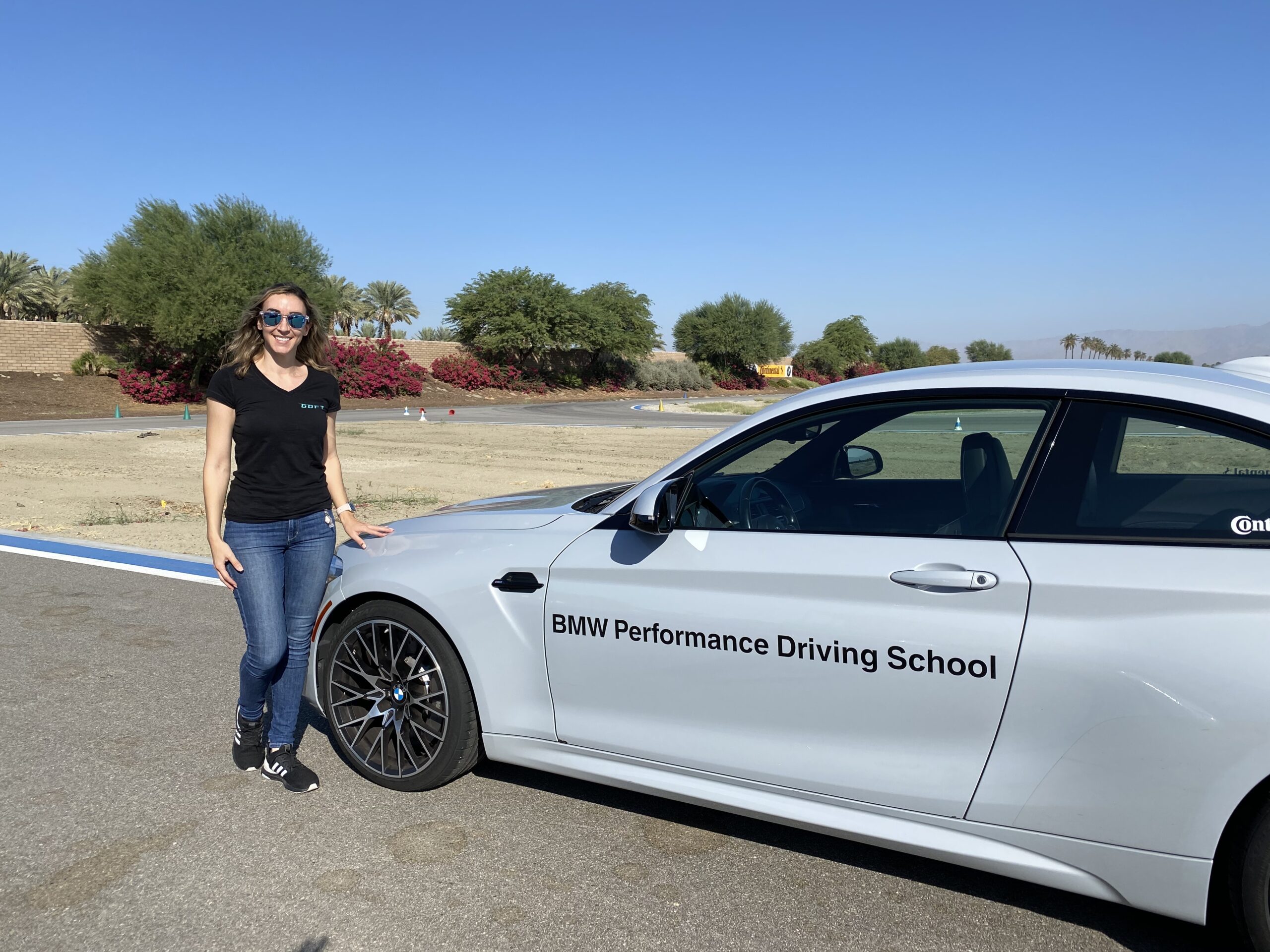