Photography and video by ©2016 Toni Avery, unless otherwise credited

Since the Miata first made its lightweight introduction into the market place, OEM after OEM has tried and not always succeeded at producing their own version. Fiat has taken a different route. Why not use the same successful, lightweight platform the Miata is known for and make an Italian superstar out of it.

I was honored to be one of a select group of media to be the first in the world to drive the all-new 124 Spider. Located in beautiful San Diego, California, we spent a full day of driving, looking at and talking about the 124. 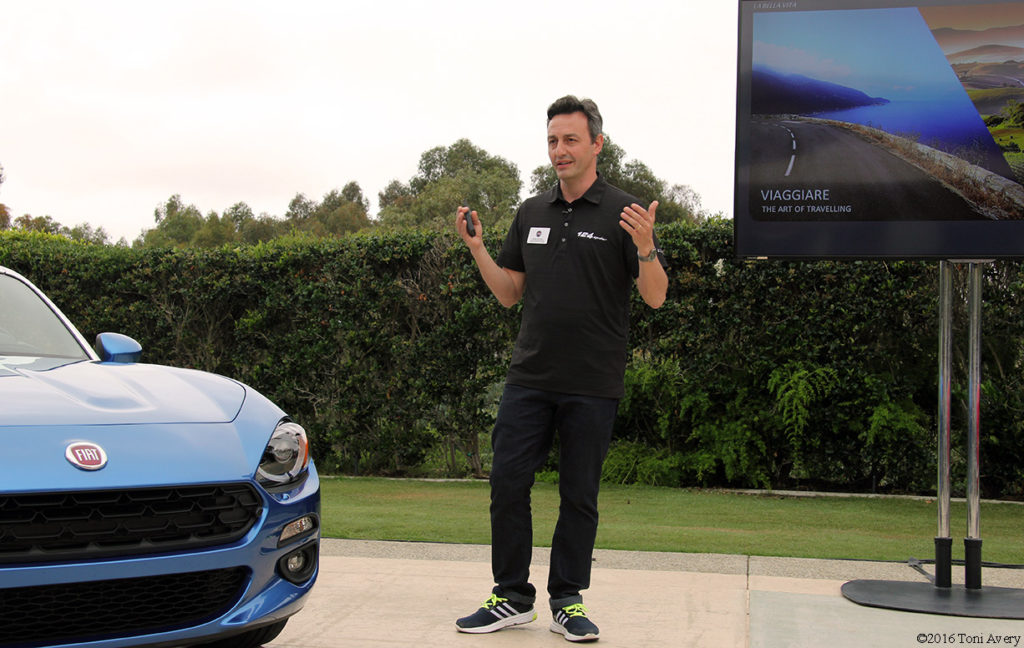 After an in-depth presentation covering the design, engineering, development and history of the 124 Spider, I anxiously sprinted in the direction of the waiting Fiats to be able to start my day in one of only two manual equipped cars, but was out of luck. Rowing my own gears, in the traditional sense, would come later but would be well worth the wait.

A Dark Grey Metallic (Grigio Moda) Lusso trim level 124 with gorgeous Saddle interior awaited as the first portion of our multi-part driving adventure began. After setting up all three GoPro’s, we were off.

This Lusso was equipped with the optional six-speed automatic transmission and standard MultiAir 1.4 L turbo four-cylinder motor found in all 124s. The automatic on both Lusso and Classica trim levels does not offer paddle shifters (Abarth only), instead if manual shifting is desired, this can only be achieved by operating the shifter found in the center console. 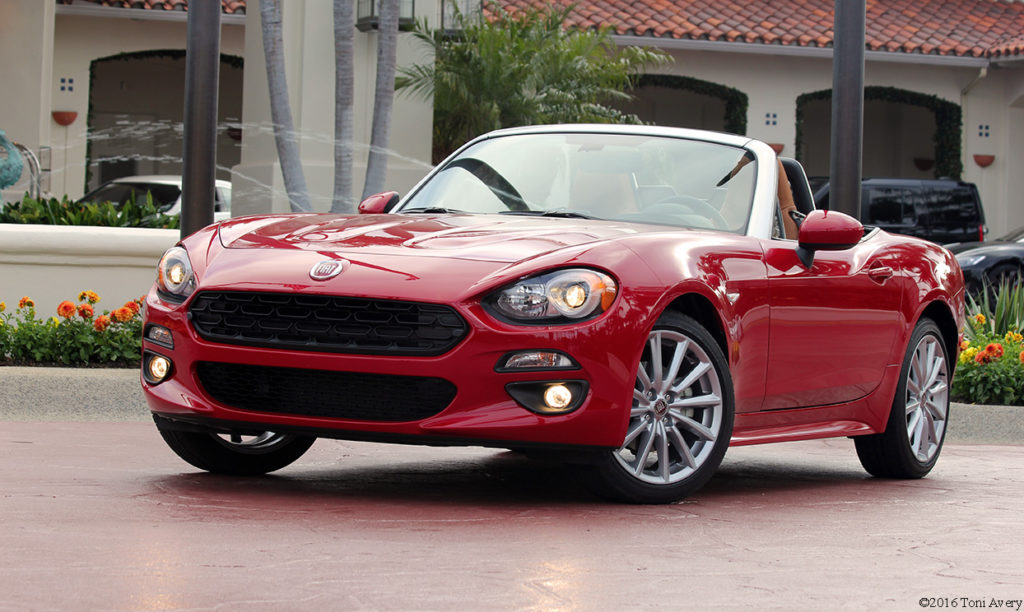 Before using manual shifting in this car, I gave the transmission a try in total automatic mode. While it took some of the aggravation of out of the early morning traffic, the transmission emphasized the engines turbo lag. RPMs seemed to arrive at slow intervals while the transmission changed gears on its own. Sure, if you tend to spend most of your day in traffic or don’t care to choose your own gear, the auto will work fine. It simply emphasizes what you never want in a turbocharged car; lag.

After a short time of allowing the car to shift for itself, I opted for the more driver involved manual shifting with the gear lever. This simple change seemed to awaken the 124, making it an entirely more enjoyable car to drive. Revs arrive quicker, lag is less noticeable and down shifts are accompanied by a nice blip. Shifts are much quicker in general when you make them yourself. I’d recommend either the auto in the Abarth (with paddles) or a manual.

The engine is the same across all three trim levels of Classica, Lusso and Abarth. It produces 160 HP (Classica and Lusso) @ 5500 RPM and 184 lb-ft of torque @ 2500 RPM with redline electronically limited at 6250 RPM. The Abarth version pumps out four additional horsepower bringing the final number to 164 HP. This motor is similar to the one found in the 500 Abarth but has been tweaked a bit providing four additional pounds of boost coming in at a grand total of 22 psi. 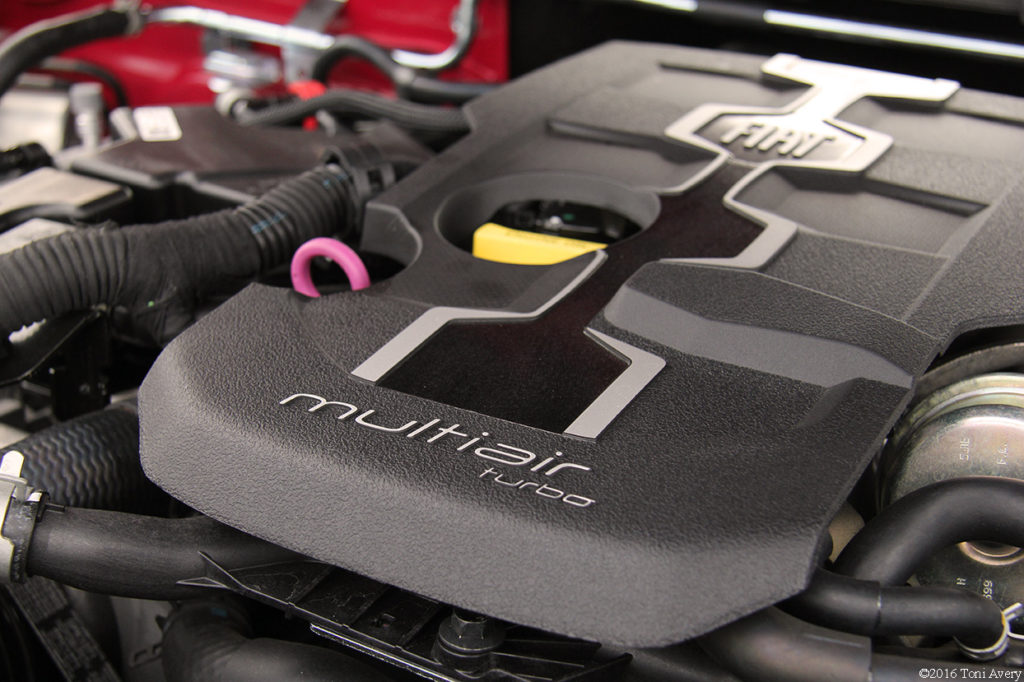 While the automatic transmission isn’t the most satisfying of the two choices offered in the 124, the engine that it is mated to is. It offers a progressive torque curve rather than a push-back-in-your-seat experience. It’s not as always eager like the Miata’s NA motor that seems to go on forever. Driving more spiritedly requires dropping down a few gears to find the right RPM for that turbo boost you want.

If you’ve had any previous experience with the 500 Abarth, you know the sound can either be obnoxious or downright cool, depending on your preference. Don’t expect the Classica or the Lusso to sound anywhere close to what you’re used to. The exhaust noise is quite similar to the current ND Miata with a minimal note. The Abarth 124 is the one for you if you’re keen on a great sound (more on that later).

Handling is fairly different to its Miata donor. The ride is smoother and less jarring over harsh roads. Lean isn’t really apparent and it feels overall stiffer. While the control-arm at the front and multilink rear suspension setups carry over from the Miata, Fiat implemented its own dampers, springs and anti-roll bars. Steering is precise with easy turn-in despite the Fiats 100-pound weight gain over the Miata. Braking is positive while the real winners here are the optional Brembo brakes only offered on the Abarth (more later). 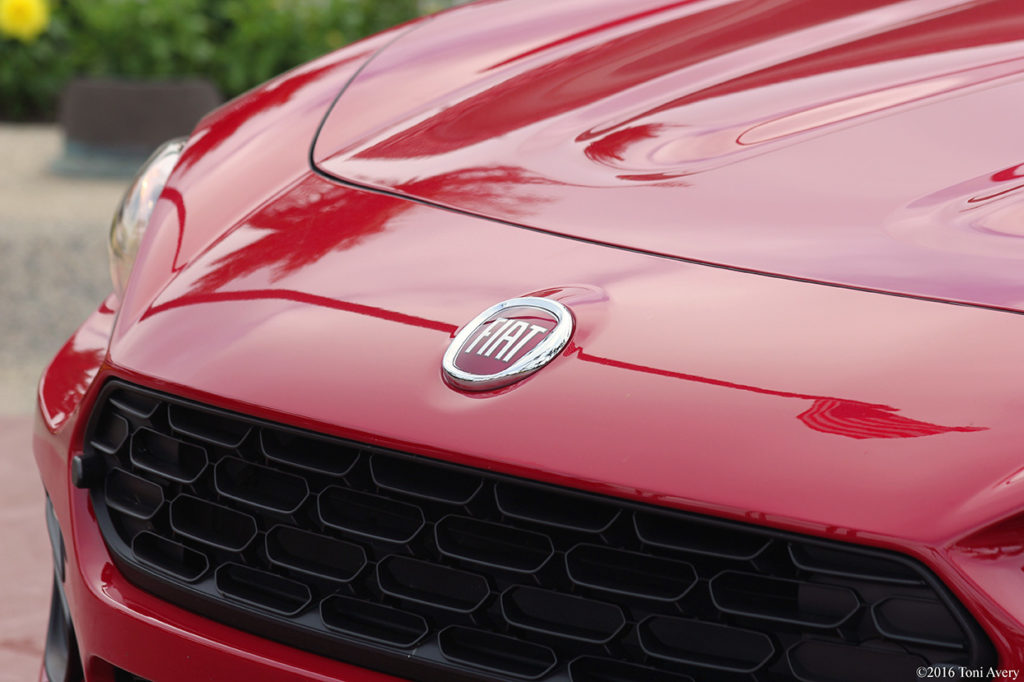 Finally the time had come to try out the manual transmission equipped 124. This car was a Classica, the lowest trim level with less standard goodies. Where the interior lacked the niceties of the Lusso, the self-rowing transmission more than made up for it.

While a generous amount of parts were used from the current generation ND Miata, the transmission has actually been transplanted from the third gen (NC) Miata. I was beyond excited to learn this because I own and daily drive an NC Club and happened to drive it down to the event. Probably due to its newness, the transmission in the Fiat was easier to shift than my Miata and the throws were nice and short and precise. It’s practically an entirely new car with the manual. It feels as though there’s significantly less turbo lag and the entire driving experience is substantially more enjoyable.

The feel of the gear shifter in your hand is different than the Miata. It’s in a more squared off shape, but it didn’t bother me when shifting in the canyon or on the street. I may need more than a couple of hours to tell if the shape would become an issue for more than just a couple hours drive. 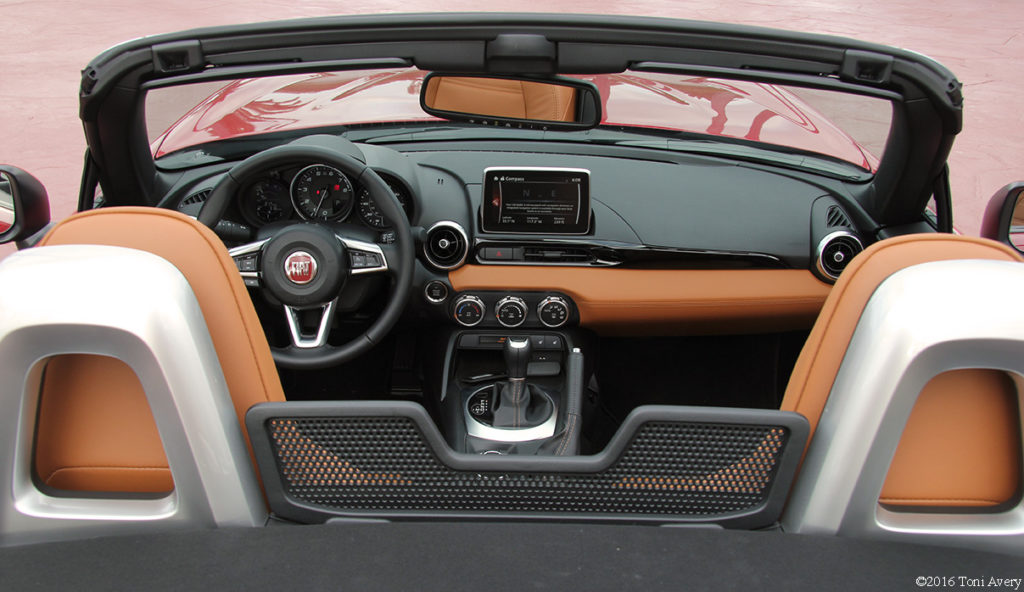 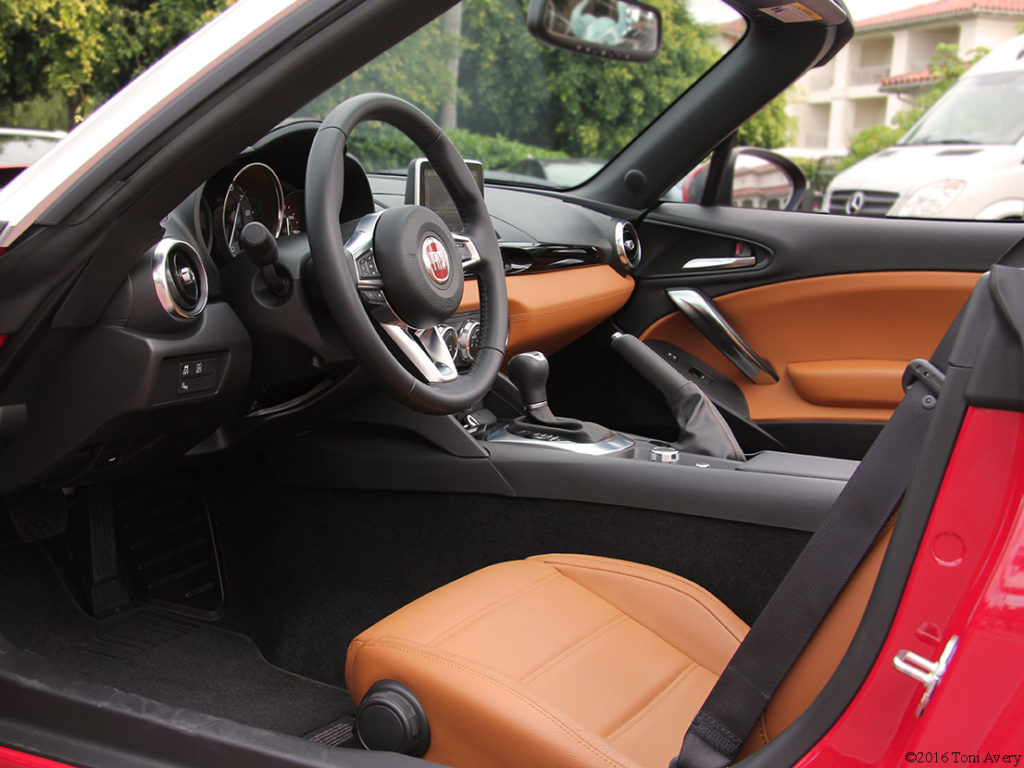 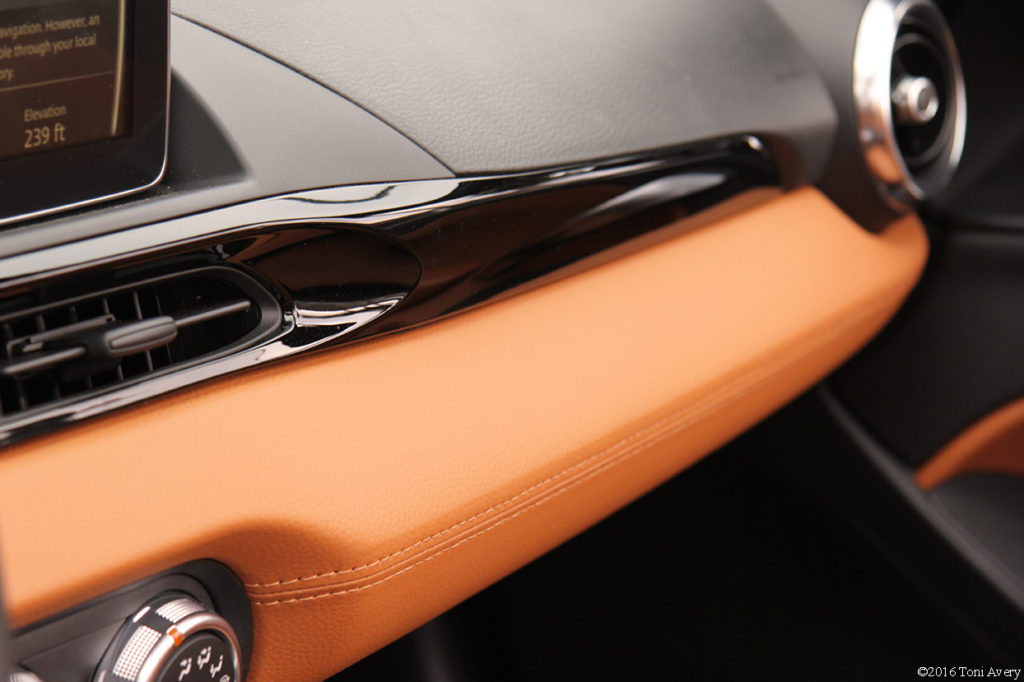 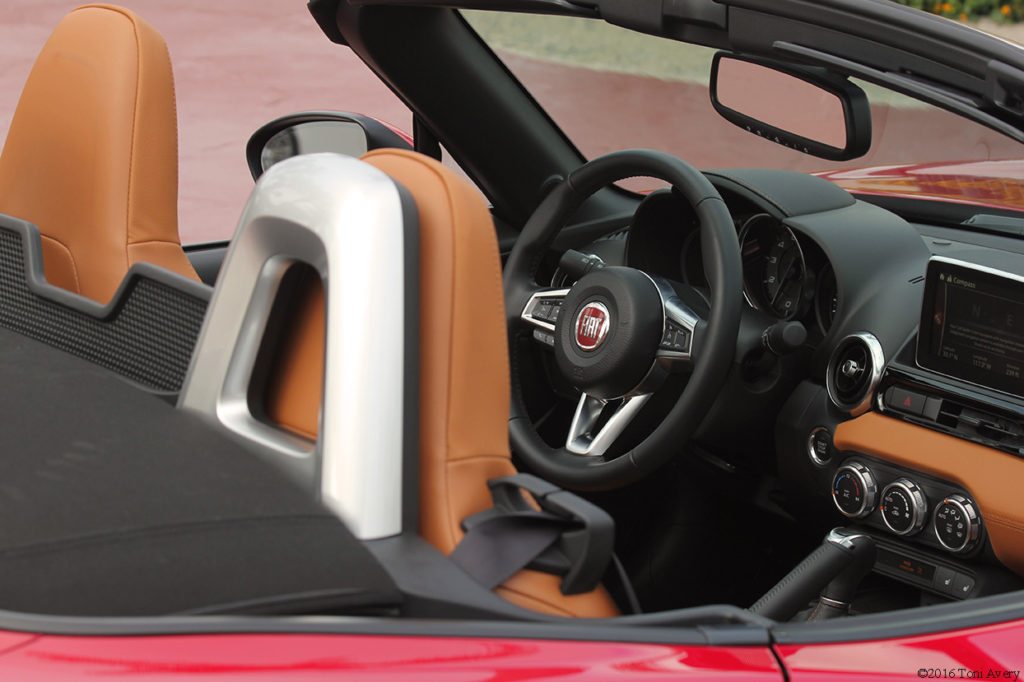 Another noticeable improvement over the Miata is how significantly quieter the cabin is inside. The Fiat uses the same one-arm manual soft top that the Miata does, but thanks to extra sound deadening throughout plus a thicker top, conversations between occupants are less of a yelling match and more enjoyable.

The interior looks nearly picked up and dropped into the 124 from the Miata. From the infotainment screen and controls, air conditioning vents and controls, gauge cluster and even the smartly placed cup holders are carried over from the Miata. The base Classica offers the simplest interior space with cloth seats and is predominantly finished in black. Moving up to the Lusso, you’ve got a beautiful accompaniment of leather touches in black (Nero) or my favorite, Saddle.

Outside of the 124 is a completely different look than the Miata. If you didn’t previously know that the Fiat and Miata are built on the same lightweight platform, you do now. But looking from the outside, you’d never guess. The Fiat is distinctly Italian and the body hangs over the 90.9-inch wheelbase more than the Miata resulting in a little more trunk space. The Lusso and Classica look similar from the outside, with the front being the biggest difference. Body colored windshield surround is a key difference from the front of the Classica to the silver painted surround Lusso. And from the rear, the Classica offers black molded roll bar covers while the Lusso sports silver. 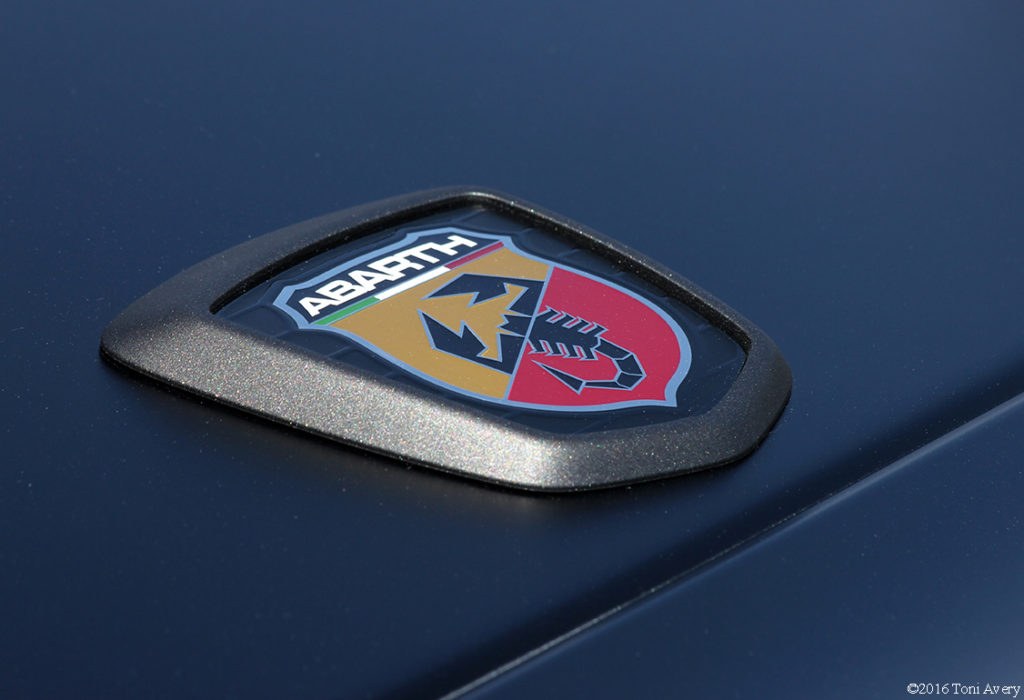 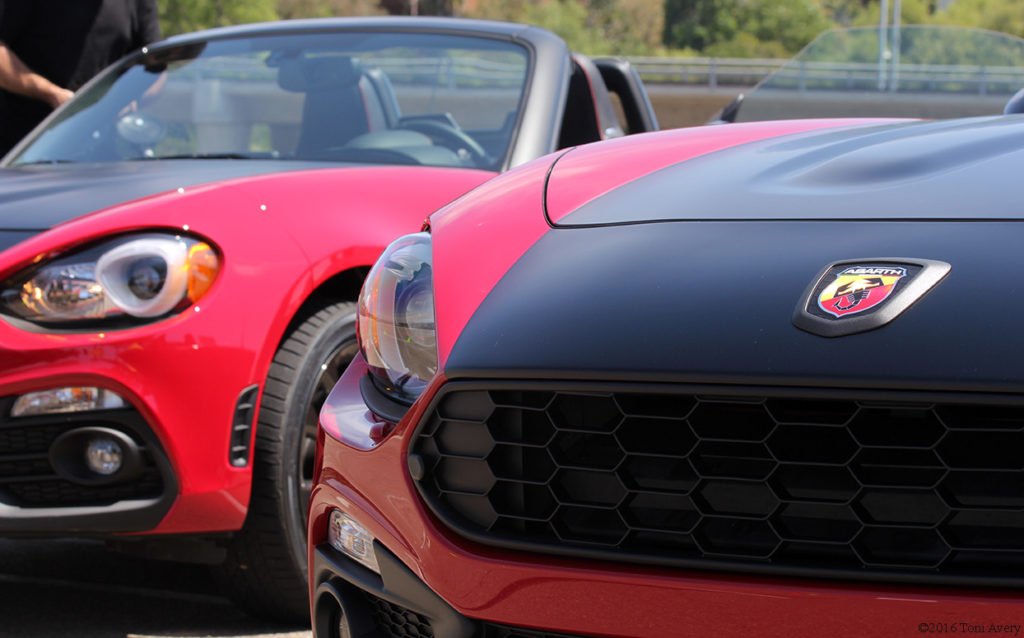 Now I know you’re anxious to read about the Abarth, and I’m anxious to tell you. This little gem was the last of the day. After lunch we headed over to the autocross course for some quality time in what would become my favorite. We were first to arrive, which resulted in some extra seat time.

As mentioned previously. The Abarth is equipped with the same MultiAir 1.4 L turbocharged four-cylinder engine but produces four additional horsepower bringing the grand total to 164 HP @ 5500 RPM while torque stays the same at 184 lb-ft of torque @ 2500 RPM. The four extra horses are thanks to the Sport Mode and unique exhaust system. Once you get inside and squeeze on the go-pedal it’s like a totally different animal.

The automatic equipped Abarth has appropriately placed paddles for shifting but it isn’t nearly as inspiring as the manual transmission. After only one lap on the autocross in the automatic I switched to the manual and never looked back. 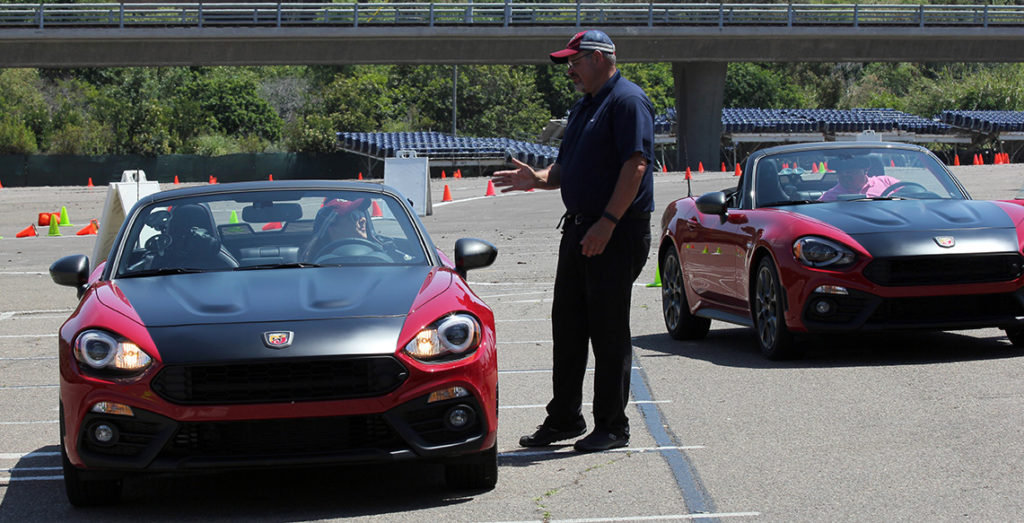 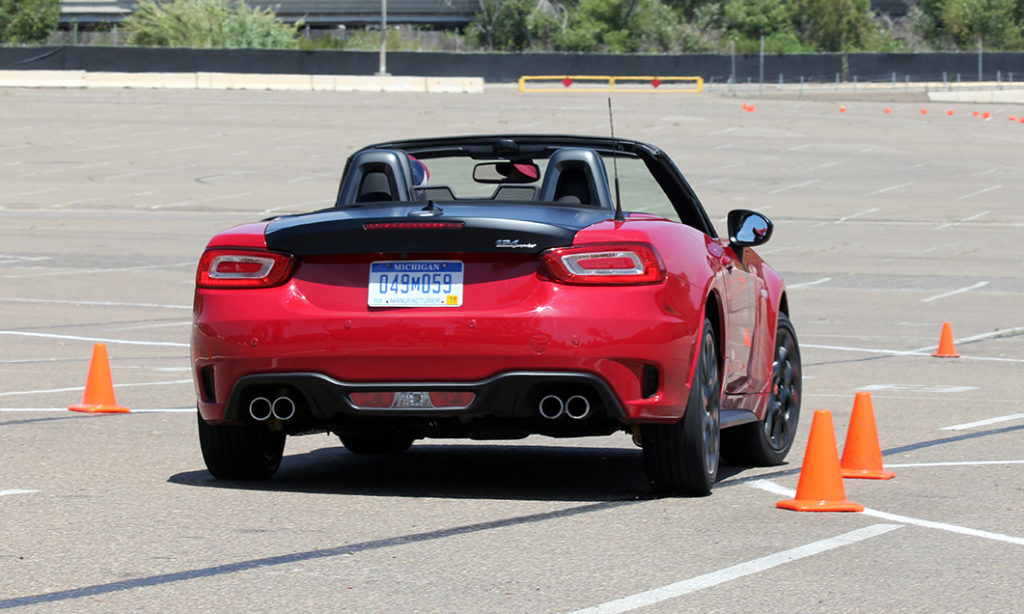 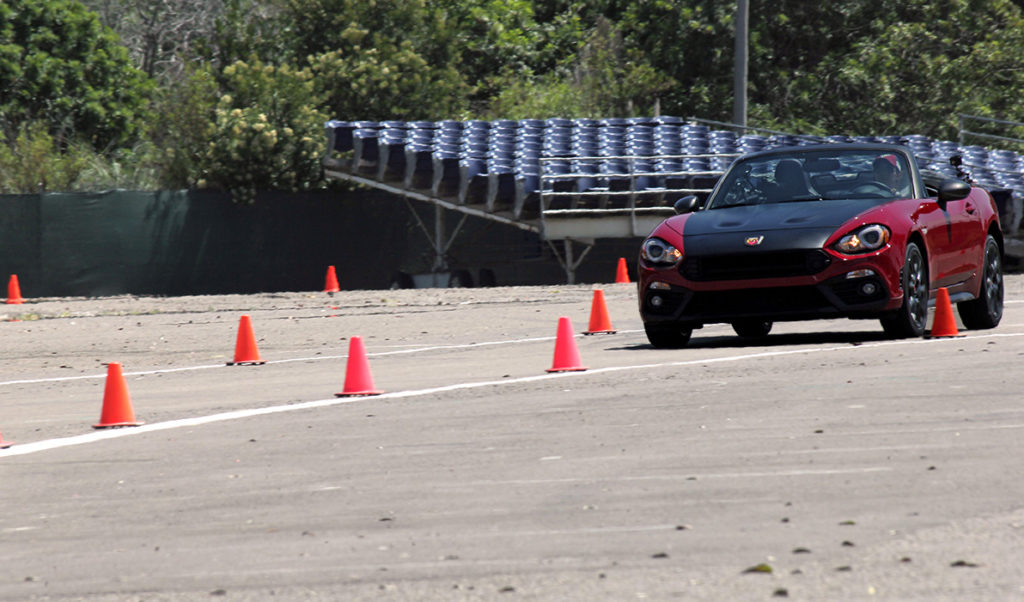 The Abarth is truly the ultimate 124. With only four additional horsepower it feels tremendously more fun. This is also helped by the optional Record Monza Dual Mode Performance Exhaust that was equipped on this car. It sounds incredible and really gives you what you were missing in the Lusso and Classica.

I noticed in my short time behind the wheel of the Abarth that it felt even more stiff and planted than the two lower trim levels. It was a confidence inspiring drive on the auto cross, even when trying to push its traction capabilities with ESC off.

Fiat worked closely with Mopar to offer some way cool optional equipment only available to Abarth owners. The fun parts include a Strut Tower Brace, Lower Arm Bar, Tunnel Bracing Kit, the previously mentioned exhaust as well as a Bypass Air Valve. The Abarth I drove was also equipped with the Bypass Air Valve, which sounds pretty unique but I was disappointed to find out that it did nothing other than make noise. 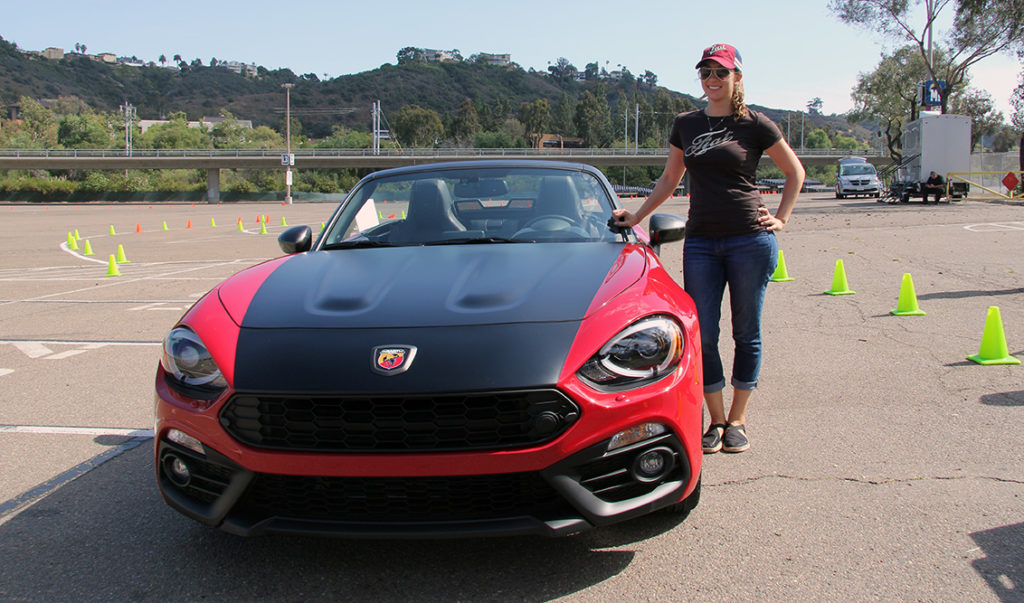 Similar to the Club Miata, Brembo brakes are offered as an option while the car is also equipped with Bilstein shocks (standard). Underneath, a standard mechanical limited slip differential further emphasizes its sporty nature.

Something the Miata doesn’t offer that Fiat has taken advantage of are Recaro seats. These offer Alcantara in the center for extra support through tight corners. A nice touch to the interior is the red tach only found in the Abarth.

A plus for the Abarth over the Club is a standard Sport Mode. This mode changes the calibrations of the engine, automatic transmission (if equipped), electric power steering, dynamic stability control system, and the suspension is performance tuned to ensure a sporty, responsive and performance-oriented driving experience. I drove with this on the entire time I rocketed around the autocross. I’d like to experience how the Sport Mode really changes how the car behaves during street and canyon driving.

The exterior of the Abarth separates itself appropriately from the other two trim levels with a more aggressive front end, Abarth badges, 17” gun metal aluminum wheels, black side sills, gun metal windshield surround and mirrors plus quad exhaust. And my favorite part is the optional matte black hood and trunk. This really lets others know you are driving the best of the 124 lineup.

While we weren’t able to take it for a spin, there will also be another 124 trim level available, but in a significantly more limited quantity. The first one hundred and twenty-four cars to leave the production line will be offered as the Prima Edizione Lusso (automatic transmission only). One was on display during our product talk and looks really sharp.

What’s the verdict, you ask? Would I take a Miata or a 124? Classica, Lusso, Abarth or Sport, Club, Grand Touring? I’ll tell you what. It’s not an easy task to take on the best-selling two-seat sports car of all time and make it their own in as grand a fashion as Fiat has. It’s obvious from spending a full day with the car how proud and confident the folks at FCA are about the outcome of the 124. And they should be. I’ll take a manual Abarth with all the Mopar goodies, please.

Special thanks to FCA for putting on a wonderful event. 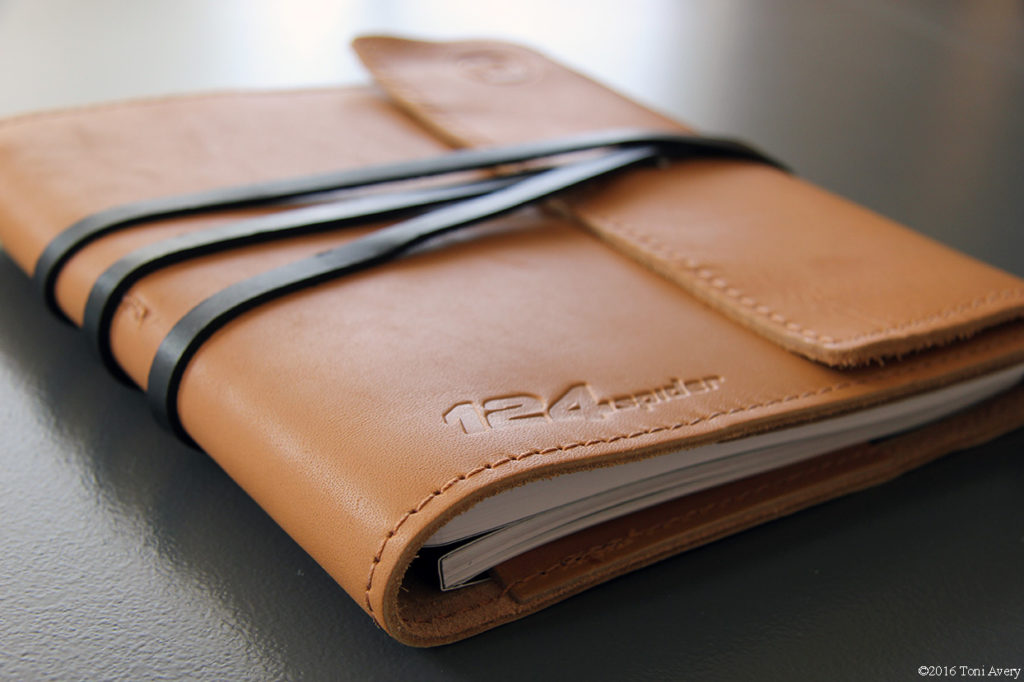