ST Fun, How Fast They Run

Recently my father purchased a Fiesta ST to replace his Mini JCW. After experiencing exorbitant repair costs for the Mini my dad decided he had had enough. Stopping at a local Ford dealer, he test-drove an ST specked out just the way he wanted. While accelerating up the on-ramp he said, “I’ll take it.”

My dad has owned everything from a Maserati Coupe to a Mustang for an everyday car, but he insists that the ST is the most fun everyday car he has ever owned. That’s saying a lot, but for the money, the Fiesta ST is a lot of fun without the big dollar hassle.

Some automakers offer new owners a special gift: with the purchase of this model we give you a racing school. In this case my dad found out via an ST forum and promptly made arrangements.

The school that offered an ST program happened to be in Utah at Miller Motorsports Park. With his new car we decided to drive the whole 10 hours from Los Angeles.

Although there was no car available for me to drive (being that my dad purchased the car and I was more of a guest) I was granted hot laps and rides with the instructors throughout the day.

After some classroom time, which we also had throughout the day, we were off to our first exercise. It was a tricky one with reverse 90° turns. To complicate matters, the weather was in the 30’s with the occasional snow flurry. But that didn’t deter participants from having fun. 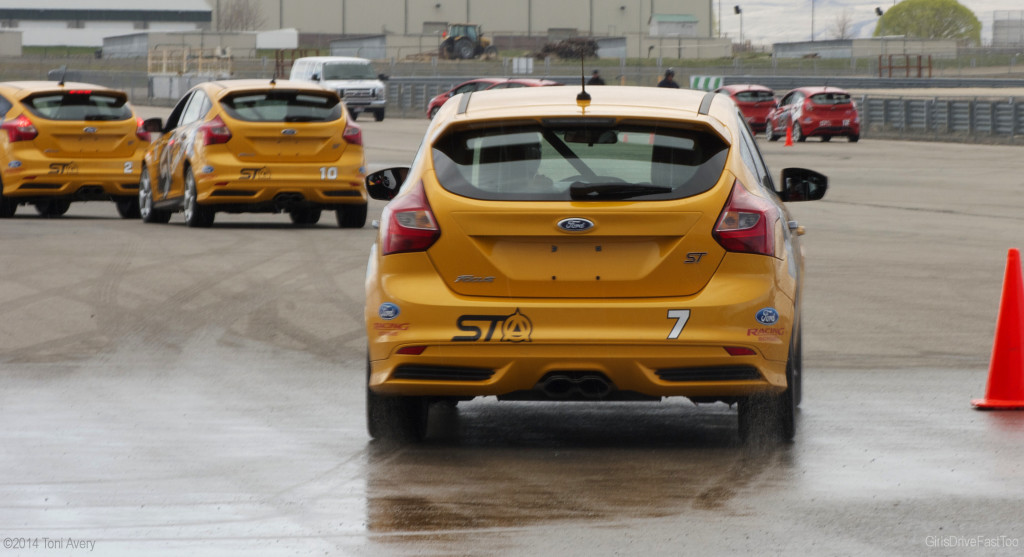 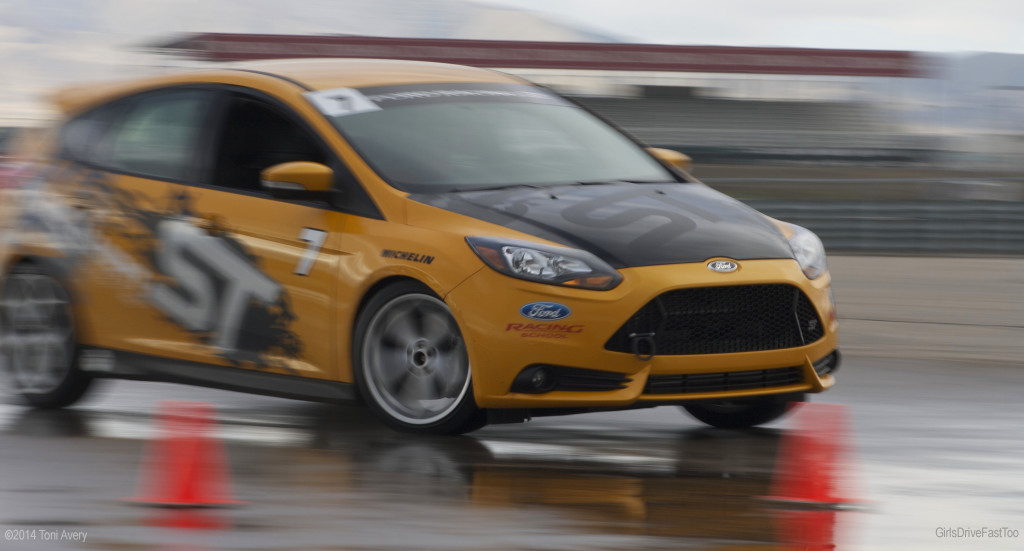 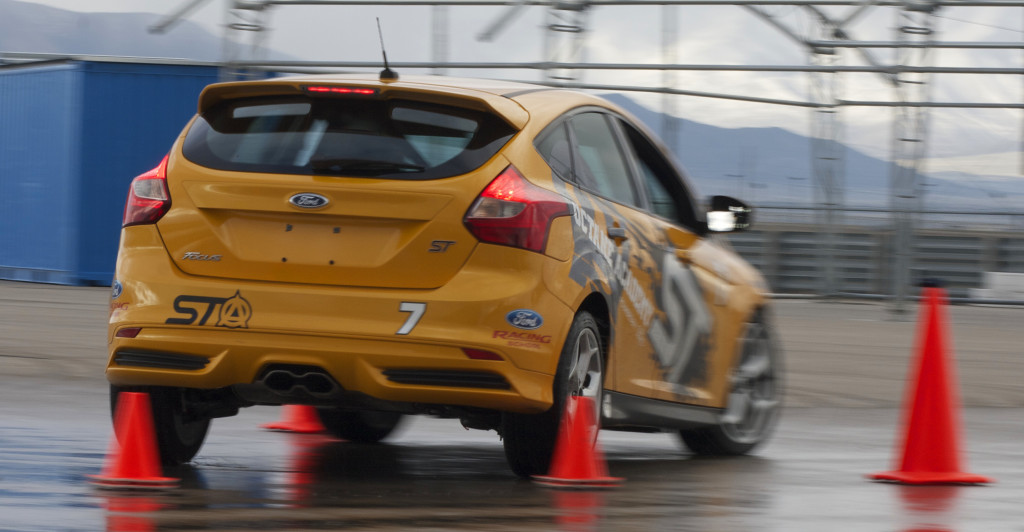 The second exercise was a little more complex with a forward facing 180° turn. Such as in the first exercise participants used a hydraulic hand brake installed in the cars specifically for these types of exercises. The trick was to turn the car the entire way without hitting surrounding cones. This came into play later.

Next was the skid car, which for this exercise was a Ford Fusion. While it’s a good idea to make mistakes and push limits that you wouldn’t normally on the street, the skid car exercise is the type you want to master especially in a state like Utah where it can snow in a moments notice.

Finally, the last exercise before track time was the all-important autocross. This is where those 90° and 180° turns would come in handy. The course practically started with a 180° turn and continued with some twisty tight turns, figure eights, slaloms and finishing with a 90° turn (sliding parallel) into a parking box. To make the course even more difficult, participants had to use the larger Focus ST, again without hitting any cones.

This might remind of you of the famous Ken Block Gymkhana videos, but for these students it was more of a test of car control and limits than showing off. The second to last run for each participant was timed and at the end of the day the results were announced.

While exercises are fun and an important part of any school, track time is where the real action happens. Typically in a one-day school the most track time you get is some lead and follow with the instructors guiding you around track. But this school granted participants precious alone time figuring out each turns apex and exit point.

I got to ride passenger with the lead follow instructor in the beginning portion of the track time. With each lap, the instructor progressively got faster, but his line was always perfect. The instructor led the pack in a Mustang GT while the class followed in their choice of Fiesta ST or Focus ST.

Each student was granted several uninterrupted laps on track in the car of their choice, figuring out the tracks lines and better understanding their new toy. My dad was thrilled to get some all-important seat time in his desired car.

A few words with Ford PR:

After the day’s exercises and track time I asked Jayson Demchak (Performance Communications Manager at Ford) a little about the Fiesta ST.

T: How much influence do customers have on a cars development?

J: The customer is always first and foremost. From lessons learned from the past you are always trying to deliver the best product to the customer. Not only do we rely on customers and ourselves but also metrics. Such as for SVT and team RS there is a global performance vehicle metric that they dial into so it’s consistent across the board not just on performance vehicles but also on regular civilian vehicles to a lesser degree.

J: Yeah. It’s a competitive marketplace and I think the group was confident in the Focus ST and I think it’s been quite successful. With the Fiesta ST it’s very similar but different at the same time. It’s almost 500 pounds lighter, so from a dynamic standpoint some of the development/dynamic guys were pretty enthusiastic about it saying, “Hey this one is even smaller so it’s even easier to toss around.”

T: What is the reason for not importing the 3-door version of the Fiesta ST?

J: There isn’t a US version of the 3-door already available in the Country. A European version would have to be modified for the US, which would be too expensive. The 5-door is an easier car to sell for the masses. The weight difference isn’t all just the rear doors; it’s crash structures plus the doors.

Jayson added: “We want to make sure that current customers take advantage of this opportunity to see what the cars are capable of and to learn how to drive the car better.”

While my dad has participated in at least 15-16 racing schools, he had a blast. He still loves his Fiesta over the Focus and has a new appreciation for the car at full speed.

Certificates of completion were distributed along with exclusive ST Academy shirts and ST badges you’ll only see on owners cars that participated in the school. Not surprisingly my dad won the autocross competition but he also won something even more valuable, the appreciation and understanding of his new ST.

The day started with classroom time. The instructor explained the layout of the track and where would be the best places to turn in, apex and brake. While classroom time is valuable, being out on the track is an entirely different animal. I hopped into my #24 Mustang and headed out onto the track.

We drove a couple of laps to get the feel for the tracks layout and that was followed by a multi-stop lap where we got out of our cars to discuss the more difficult corners.

Next up were a few laps of lead and follow that included switching the lead driver every couple of laps so that each student had the opportunity to follow the instructor’s perfect line.

Our track time was broken up by a much-deserved lunch. Most of the time when lunch is served at a racing school we all sit around the classroom and talk. But this time we were lucky enough to be surrounded by some truly iconic cars. We had lunch in the schools museum filled with some of the most recognizable and amazing American classics around. From a GT350 to an 11 million dollar Ford GT40. My personal favorite was the wonderful collection of GT40’s but we also got some shots of other amazing cars on display. 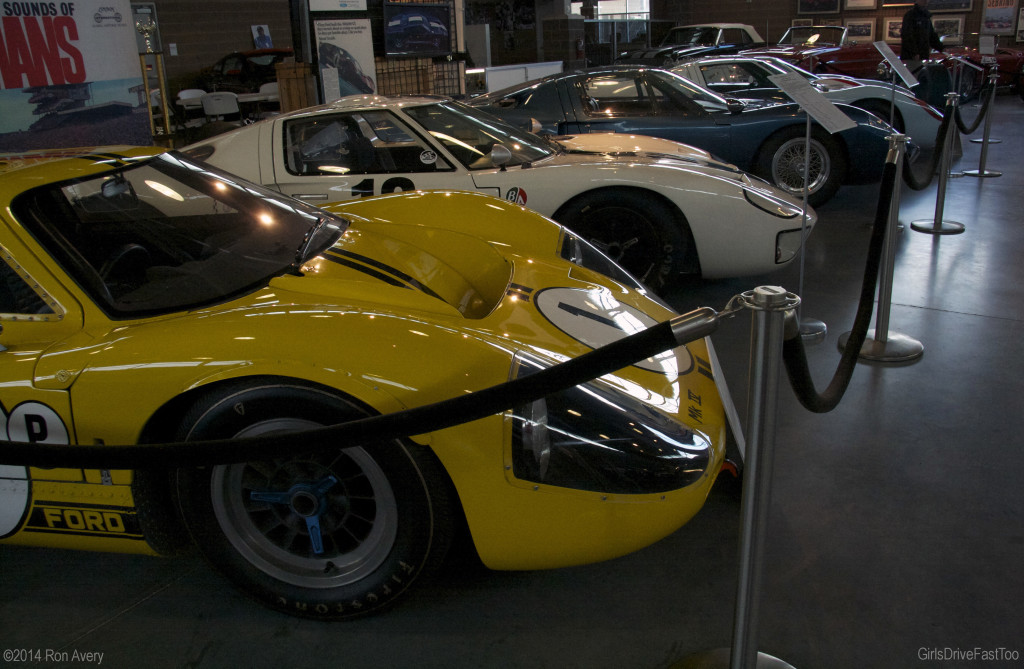 Since our class was so small (only three people including my dad and I) and we were the inaugural class the instructor asked us what we would prefer to do. Typically the instructor would let us loose on track and ride along with someone if they wanted. This time we wanted a combination of rides with the instructor at the wheel and the rest of the time with him being passenger.

During my time alone on track I found myself concentrating more on my line rather than top-speed. But once the instructor buckled himself in he pushed me to press the accelerator a little more and be less cautious. In certain corners he would have me lift off the brake earlier and accelerate earlier as well. I found myself having more fun, carrying more speed and having more trust in the car.

The time when the instructor was guiding me from the passenger seat was the most valuable. I discovered that it doesn’t matter how many schools you take or how often you drive, it’s always helpful to accept wisdom from the mouth of someone who knows more than you. It’s also important to trust. If you don’t trust the car then it can’t show you what it’s really made of. Once I put my reservations aside I felt more comfortable and confident. Plus the sound of the exhaust on those GT’s made me want to buy one just to run it through an enclosed tunnel on a daily basis.

Miller Motorsports Park was by far the most beautiful track I’ve been to. I plan to come back for many more schools in hopes of improving my technique and confidence on track. 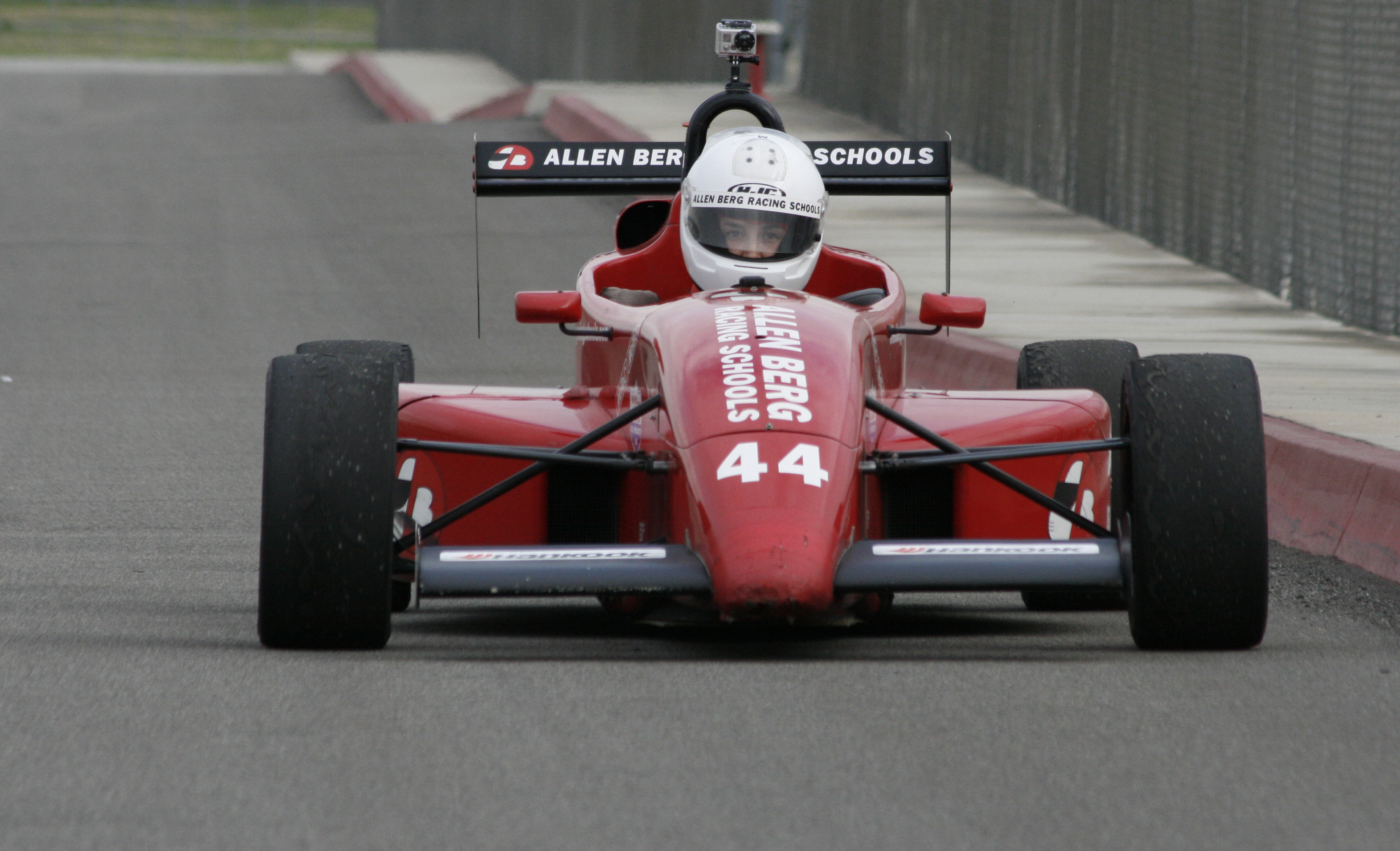 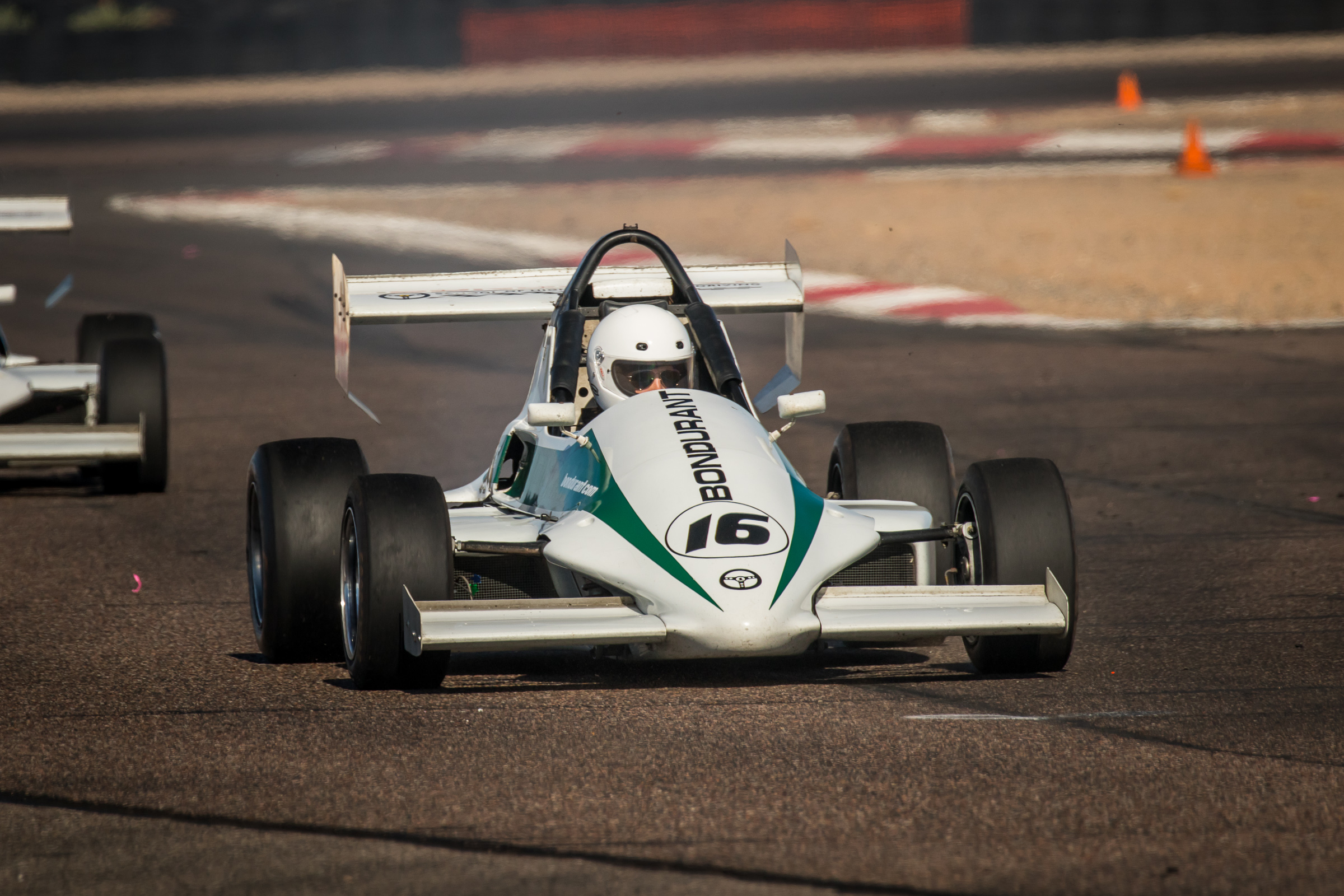